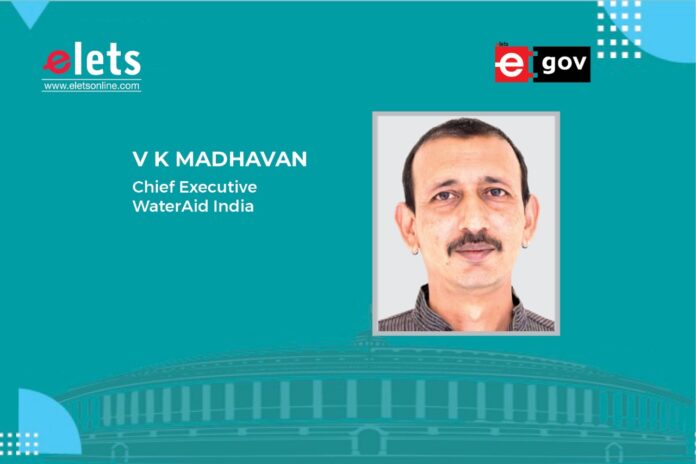 India’s progress, alone, in sanitation will significantly shift the global indicators with regard to the achievement of the Sustainable Development Goal 6.2, writes VK Madhavan, Chief Executive, WaterAid India.

The progress, thus far, has been possible because of a confluence of the following factors – political will at the highest level, clear intent, supportive policies, significant public investment, and a recognition of the importance of behaviour change.

The guidelines for Swachh Bharat Mission Urban 2.0 released in October 2021, whilst seeking to ensure that no one is left behind with regards to access to a toilet and on sustaining the gains thus far, also prioritise clear air, clean water and clean land with a special emphasis on making our cities garbage free. Moving beyond mere Open Defaecation Free (ODF) cities, there are standardised protocols and clear targets for ODF+, ODF++ and for Water+. The use of innovative digital tools, continued incentivising of competition among urban local bodies through the Swachh Survekshan, and a continued recognition of the importance of behaviour change mark the focus.

Despite the clarity of thought, there is a need to raise the bar.

Evidence would suggest that the fastest growing urban centres are not merely the large metropolitan cities any more. More importantly, peri-urban areas have emerged as an important constituent of urban agglomerations that require attention. In many instances, these may still be governed by rural local bodies, despite displaying most other characteristics of an urban settlement. Governance by a rural local body in these areas and the accompanying funding patterns lead to a very different set of priorities in terms of basic services. There is also the problem of definitions of an urban area, with these not being substantially revised since 1971. In the absence of resolving these definitions, water supply, waste management, coverage of sewerage networks and waste or used water recycling do not find emphasis. Even within existing towns, the proportion of the urban poor residing in slums (formal or informal) should be an important criteria for determining emphasis and investment. A differentiated strategy for smaller towns, peri-urban areas, census towns as well as urban areas with a significant slum population is required.

The standards adopted by the Joint Monitoring Programme of WHO and UNICEF have a ladder of services. Reliance on shared toilets – community or public, are considered to be ‘limited’ in the context of the quality of services, while private toilets are essential to be considered ‘basic’. India should strive to focus on ‘safely managed sanitation’ – private toilets, safe management of faecal waste and a handwashing facility with soap and water. In other words, there is a need to focus on individual household toilets, as the first choice. This is particularly difficult in slums that are considered non-notified. Several cities have chosen to provide basic services such as water and sanitation to residents even in non-notified slums by separating the provision of such services from right to tenure. This may require national guidelines.

The guidelines for SBM Urban 2.0 seek to ensure the safety and wellbeing of sanitation workers. However, deaths in septic tanks and while cleaning sewer lines continue. Mechanisation of desludging is one step to improve safety, but inadequate. Gender and socio- economic factors currently not just condemn families to performing these roles in perpetuity, but inhibit their opportunities to break out of this occupation. Their invisibility and absence of a voice further pushes them to the periphery. Attempts at the rehabilitation of sanitation workers or even provision of compensation in case of death have, by and large, failed. There is an urgent need to commence with a rigorous enumeration of sanitation workers and the kinds of services they perform. This could be a part of the existing Swachh Survekshan. Enumeration of sanitation workers will provide reliable information about the extent of the problem and will facilitate systematic efforts to focus on their dignity and well-being.

Only 40 per cent of India’s urban population is connected to a sewer network. A smaller proportion of the treated waste or used water is actually recycled or reused. SBM 2.0 seeks to create a capacity of treating nearly 12,900 million litres per day in close to 4,000 towns with a population less than one lakh. This would require a significant investment in conveyance systems in addition to treatment facilities. Here again, ensuring connectivity of the urban poor, who reside in slums to these systems will pose a challenge. Finding the right balance between decentralised and centralised systems as well as creating the right incentives for recycling and reuse will be critical to ensuring that our waste water is not released without treatment.

Finally, there is an urgent need to address the challenges of urban governance and the capacities and roles of our urban local bodies as well as those of our public utilities. Most of our existing public utilities are financially unviable institutions. In addition to addressing existing inefficiencies, meeting the demands of our cities with regard to sanitation will require substantive financing – and new financial instruments – beyond SBM 2.0. Their skills and capacities to not just address the challenges of today but a future where the impact of climate change threatens all current plans, are limited. Their accountability to our elected urban local bodies also requires clarification.

Our cities are drivers of economic growth and living in a city is aspirational. Consequently, the proportion of our urban population will continue to grow. The quality of life will be contingent on our ability to ensure that we meet the targets of SBM 2.0 and SDG 6.2.