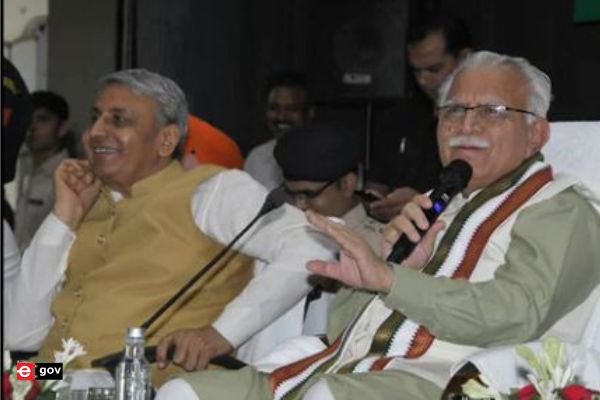 Haryana Chief Minister Manohar Lal has taken another initiative in the direction of making India self-reliant, as per Prime Minister Narendra Modi’s vision to promote natural farming in the state, by announcing subsidy of up to Rs 25,000 on the purchase of indigenous cows and providing four big drums to farmers to prepare the solution of Jeevamrut for natural farming, free of cost. Haryana will be the first state in the country to do so.

The chief minister was speaking as the chief guest at the state level review meeting on natural farming, organised at Dr Mangal Sain Auditorium Hall in Karnal on Monday. He interacted directly with agriculture experts and gave tips on increasing natural farming. He said that farmers having 2 to 5 acres of land registered on the portal, and who voluntarily adopt natural farming, will be provided 50 per cent subsidy for purchasing indigenous cows.

The chief minister, while addressing the technical assistant managers, block technical assistant managers and the farmers associated with the Agricultural Technology Management Agency (ATMA) of the Central government, said that Atma Yojana of agriculture department will fix the poisonous food grains being produced in the fields due to indiscriminate use of chemical fertilisers. He said that Sikkim is the first state in the country which has moved completely to natural farming and work is also being done in Himachal Pradesh, Gujarat, Maharashtra and Madhya Pradesh. Now, the Haryana government will take a new initiative to give subsidies on the purchase of indigenous cows.

The chief minister said that he is glad that farmers are now understanding natural farming and so far, 1,253 farmers of the state have registered themselves voluntarily for adopting natural farming, on the portal created by the Agriculture Department. He said that there was a time when there was a shortage of food grains in the country in the 1960s. For this, a call for Green Revolution was given, due to which there was indiscriminate use of chemical fertilisers and there was no shortage of foodgrains in the country. Now, due to the use of chemical fertilisers, the fields have become poisonous and the production of foodgrains has also become poisonous. “We should take a pledge that we will neither sow poison nor eat poison,” he said.

The chief minister said that “if we get sick, then we go to get medicine and now, natural farming is with us as an alternative to medicine. We have to adopt it as a part of our lives.”

Directly interacting with ATMs and BTMs, it came to the notice of the chief minister that monthly honorarium has not been received for the last 6-7 months and he directed the Additional Chief Secretary of the finance department over the phone to release the honorarium with immediate effect.

In a direct interaction during the programme, the chief minister said that a portal will be made for the farmers to set up a demonstration plant of natural farming. Along with complete information about the land, farmers will also get information on adopting crop diversification on the portal. Apart from this, it will also give information about growing pulses. In this way, if the department has complete information, then monitoring can be done easily. The chief minister said that training should be given to farmers in small groups so that they can get information on crop production in a better way. Such a scheme will also be prepared so that the customers in the market do not have doubts about whether it is a product of natural farming or not.

700 Agriculture Development Officers to be recruited

Haryana Agriculture and Farmers‘ Welfare Minister Jai Parkash Dalal in his address said that the chief minister always thinks about the interests of farmers. He said that by adopting natural methods, the income of the farmers will increase. He further said that the government has implemented schemes like Mera Pani-Meri Virasat to save water and Bhavantar Bharpayee for farmers to get full price for their produce. Rs. 450 crore has been given to the farmers under this scheme. A provision has also been made to give an incentive amount of Rs. 6,000 per acre to reduce the sowing of paddy crop.