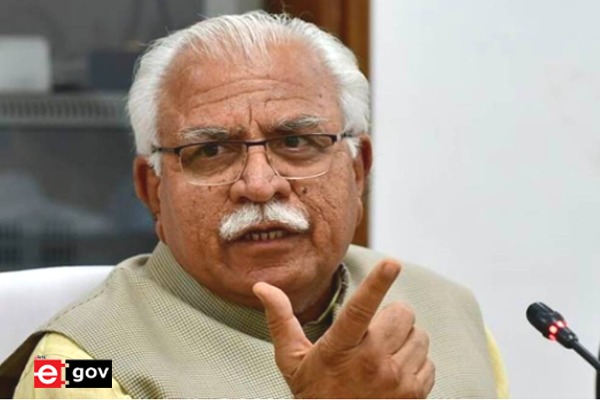 Haryana Chief Minister, Sh. Manohar Lal while directing Administrative Officers said that the state government is committed to provide pure drinking water to every citizen in the state, in this direction more and more rainwells have been renovated to increase the quantity of drinking water. He directed the officers to explore new possibilities towards rainwater harvesting. He said that it should also be ensured that drinking water is not used for irrigation and a strict vigil should be kept on illicit exploitation of drinking water supply systems.

Chief Minister, Sh. Manohar Lal said this during a review meeting of Projects worth more than Rs. 100 crore today.

The Chief Minister today reviewed in detail 48 projects of 6 Departments. The reviewed projects were worth more than Rs. 100 crore.

He said that ensuring holistic development of Haryana is the top priority of the State Government, hence the Project Evaluation and Review Technique (PERT) chart should be prepared for all ongoing projects so that the status of timeline, completion percentage and expected opening date can be mapped from time to time.

During the meeting, Haryana Chief Secretary, Sh. Sanjeev Kaushal apprised the Chief Minister that at present work is going on in more than 80 projects of 12 Departments, out of which 48 projects of six major departments have been kept for review in today’s review meeting.

He said that on January 9, 2022, the Chief Minister, reiterating his commitment to boost the pace of development of the state, approved the formation of a three-member committee under the chairmanship of the Chief Secretary to review all the ongoing projects worth more than Rs. 100 crore. Several review meetings of about 12 departments have been held by this committee.

Regarding the 16 projects being implemented by the Irrigation Department, Additional Chief Secretary, Sh. Devender Singh informed that the work of construction of new parallel line channel (PLC) from Dadupur to Hamida and remodeling of WJC MLL form RD 0 to 68220 is on schedule. Apart from this, the projects of expansion of capacity of Hansi branch and JLN feeder canal, remodeling of GW channel and rejuvenation and development of Saraswati River were also discussed.

In the meeting, Chief Executive Officer of Gurugram Metropolitan Development Authority, Sh. Sudhir Rajpal informed that the work of Shri Sheetla Mata Devi Medical College and Hospital being built in Gurugram has started on which about Rs. 680 crore will be spent and its work will be done till August 2024 which will be completed. He said that the work of construction of a 100 MLD sewage treatment plant and pumping station will start in the month of July. It was informed in the meeting that 70 percent work of the runway of Hisar airport has been completed and this work will be completed at the end of the year. Apart from this, various projects of the Horticulture Department, Haryana Urban Development Authority were also discussed in detail.