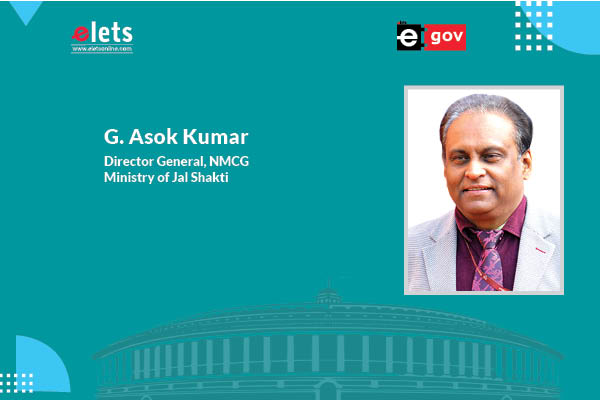 Ganga has faced atrocities from urbanisation through the years. Loads of untreated sewage and industrial effluents poisoning the river had made it imperative to take stricter actions to save it. Thus, the National Mission for Clean Ganga (NMCG) was launched in 2014 and thankfully, today, the mainstem of the river is clean while the work on cleaning its tributaries is still underway, said G Asok Kumar, Director General, NMCG, Ministry of Jal Shakti, in an exclusive interview with Krishna C Mishra of the eGov Magazine.

The core vision of ‘Namami Gange’ is making Ganga ‘nirmal’ and ‘aviral’. What are some of the recent developments made by NMCG towards achieving this vision?

Namami Gange is one of the flagship programmes of the Government of India that intends to make Ganga and its tributaries clean. The revered river has religious beliefs and cultural significance associated with it.

When we speak of making Ganga nirmal, we refer to ensuring the flow of clean water in the river which is referred to as nirmalta or sanctity of the river. While aviralta is maintaining a continuous minimum ecological flow in the river.

As Ganga flows down from Devprayag in Uttarakhand to Ganga Sagar in West Bengal, where it drains in the Bay of Bengal, it is joined by several small and large rivers that add volume to it. However, despite the huge water volume that it carries, in the dry season, the flow of the river becomes nearly nil at some stretches. And, pollution in the river has always been a major threat to the Ganga’s ecosystem. Therefore, the two major pillars of the Namami Gange were making Ganga nirmal and aviral.

To a large extent, we have achieved the first aspect which is making the river clean. The mainstem Ganga is now clean. When we compare the statistics of most polluted stretches in 2015 and 2021, we see the pollution level has slumped dramatically and the water quality is now in compliance with the standards. Also, the populace that visited Ganga for taking holy dips have increased. Ardha Kumbh, in 2019, is a great example where nearly 20 crore people participated. The Prime Minister of India also took a dip in the holy river during the religious gathering.

We are establishing 161 sewage treatment plants (STPs) and associated facilities at a cost of ₹25000 crore of which work for 75 STPs is completed. STPs are being set up to ensure no untreated sewage or waste enters the river. Further, from the mainstem, we are now shifting focus to the tributaries. Also, in industrial cities & towns like Kanpur, we are setting up Common Effluent Treatment Plants (CETPs) to ensure no harmful effluents or industrial waste enter the river. The infamous Sisamao nala which used to drain over 140 million litres of sewage and waste in Ganga was diverted to STPs in 2019. Not a drop of sewage enters the river from that source anymore. With such recurring efforts to revive the sanctity of Ganga, the flora & fauna of the river’s ecosystem has enriched in the past few years. The count of the famous Ganges Dolphins have also increased.

Apart from being revered as a holy river, Ganga also plays a role in boosting local economies. How is the project faring on that front?

Ganga is a lifeline at the indo-gangetic plains that houses nearly 40 per cent of the country’s population. Thus, rejuvenation of the holy river becomes utmost important.

Our first focus was to clean the water and therefore the setting up of STPs was done. Meanwhile, the second focus was to maintain the flow in the river. Besides this, the other important aspect was sustenance wherein citizens were engaged in the process of conservation and preservation of the Ganga ecosystem to ensure sustainability. In the National Ganga Council Meet in 2019, the PM introduced the concept of ‘Ardha Ganga’ which is connecting people and the river through an economic bridge. With this, the river can be used to help economic development of the people and if people see economic benefit from the river, they will contribute to the sustenance of the river.

In addition, we are moving from the concrete structures of STPs to zero-waste natural farming. There are six verticals under the Ardha Ganga initiative, the first is the Zero-Waste Natural Farming. Under this, the farmers near the river will be encouraged to take up organic farming to ensure that no or least fertilizers are used and productivity is enhanced through natural processes. Also, with STPs in operation, large amounts of sludge is generated which can be turned into manure or fertilizers and supplied to the farmers. Further, treated waste water can be used for irrigation in place of freshwater.

Secondly, to support organic farming, the Government is planning to set up haats where the local farmers can sell their organic farm produce. Further, we are trying to create tourism opportunities in towns and areas on the banks of the Ganga as most of these places carry cultural, religious and historic significance. We are also trying for Institution development wherein local institutions and people could take over the maintenance of the initiatives taken under the Ardha Ganga. Citizens are being engaged actively for proper execution of the initiatives and the entire Ardha Ganga initiative is also linked with the livelihood mission. Therefore, these six verticals will help us in the sustenance of the river.

As you have been an esteemed participant in Elets conferences multiple times. What is that one message that you would like to convey to our audience?

Being a part of Elets conferences has always been a wonderful experience. You are advocating technology adoption in governance and spreading the knowledge on various aspects of e-governance through your platform. I wish all the luck for the upcoming Elets AatmaNirbhar Bharat Summit that will open a platform for top bureaucrats, thought leaders and academia to present innovative solutions before a large audience and help build a network with industries and experts to find sustainable solutions to the issues in governance.

Alongside making India AatmaNibhar, we also have a target to achieve a $5 trillion economy. Considering this goal, water would be one of the most limiting factors. The techniques that NMCG is using for reuse and recycling of water and reducing the use of freshwater for industrial and agricultural use, would help conserve water and counter major issues in water sustainability in the long run. I request all the readers to respect water, use it judiciously and conserve it.