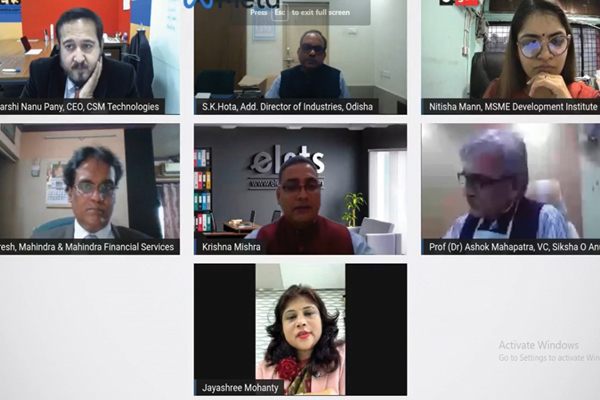 With around 6.3 crore MSMEs in India, the sector poses a major contributor to boosting the economy of the country. Realising the significance of MSMEs in economic growth, Elets Technomedia and Meta organised the MSME Growth Summit – Odisha edition on December 28. The Summit emphasised how the Government of Odisha is aiding the MSMEs and the role of MSME in propelling the recovery of Odisha’s economy in the post-pandemic era.

Dr Ravi Gupta, Founder & CEO, Elets Technomedia commenced the summit with an opening address to set the tone of discussions. Dr Gupta also welcomed all the esteemed speakers from the Government of Odisha and industry to the summit. Krishna C Mishra of Elets Technomedia moderated the panel discussion.

“MSMEs contributes to 49% of total exports”

Nitisha Mann, Deputy Director, MSME Development Institute, Cuttack, Ministry of MSME, Government of India said that the state government has become an active facilitator in the growth of all the sectors particularly MSMEs. In the aftermath of the COVID pandemic, maximum support is being extended in form of handholding of MSMEs, in both manufacturing and services areas. The entire system has become demand-driven given the response received by MSME which motivated the government to take more initiatives for their better support.

The statistics themselves speak of the potential of the MSMEs which contributes 49 per cent of the total exports and 45 per cent of the GDP contribution in the manufacturing sector and 30 per cent in the service sector. As per an estimate of 2015-16, six million MSMEs are operational in the country. The MSME sector is the second largest employer in India after agriculture. But it has been observed that a number of workers are engaged in non-productive areas. Such a workforce needs to be trained in skill development and re-engaged in the MSME sector.

Sharing her views on the One District One Product (ODOP) scheme which was successfully implemented in Uttar Pradesh before the Centre released it on a national level, Mann said, the Government of India has identified 106 products from various districts across the country, out of which four products are from Odisha. Further, Odisha also offers products in the agriculture and exports sectors from all its 30 districts.

S K Hota, Additional Director of Industries, MSME Department, Government of Odisha, highlighted that in addition to the policy of the central government, the state government of Odisha has exclusive policies to facilitate the entrepreneurs. Policies namely Industrial Policy Resolution (IPR), Food Processing Policy, Startup Policy has both fiscal and non-fiscal incentives to it which have been clearly laid out by the state government.

Presently, the incentives are limited to only manufacturing units and enough funds have been made available to facilitate the MSMEs. The process for applying for the incentives is easily available online for the convenience of MSMEs and entrepreneurs. To extend more help to the startups in Odisha, the state government has established Odisha O-Hub, which is a one-stop solution for entrepreneurs.

On benefits being extended to MSMEs by the government, Hota stated that the state government is doing its best to make an ecosystem for the MSMEs through its fiscal and non-fiscal benefits. “We have the facility for exempting net GST after the deduction of import tax and output liability at par with the 100 per cent of the investment on plant and machinery. There is an arrangement to exempt electricity duty for a period of five years up to the demand of 500 KVA. Similarly, the interest subsidy will be extended for a period of five years for a term loan. Further, land conversion charges that are levied before starting the industry are totally exempted for MSMEs,” he pointed out.

“MSMEs to be pillars of new India”

Priyadarshi Nanu Pany, Chief Executive Officer, CSM Technologies, said that micro, small and medium enterprises (MSMEs) will be the strongest pillars in the times to come on which the new India will rest. Much of the work to strengthen the MSME sector was done during the infamous COVID-19 pandemic, through various schemes, than it was done in the last few years.

“As of now, we have over six million registered MSMEs in the country which currently employs over 12 crore people constituting 45 per cent of the workforce in the country. In 2019-20, MSMEs have contributed 30 per cent to the national GDP,” Pany pointed out. IT has been the growth engine propelling MSMEs. The Government of India, during the pandemic, has extended a lot of support to the MSMEs with an array of supportive schemes and collateral-free loans which should become a permanent feature for entrepreneurs who are in need of it, he added.

Sharing his insights on leveraging technology in integrating MSMEs with the global value chain, Pany said, the technology is needed to be embedded irrespective of the size and scale of the business. “Today, we do not have to run from pillar to post to submit documents and technology is well-taking care of such mundane tasks. Today, the e-commerce giants are digitising the 2.5 million MSMEs, bringing consumers, manufacturers, and artisans together under one umbrella. The model enables all the MSMEs, artisans to cater to greater marketplaces and grow their businesses.

Today, the GDP has gone down by 2-3 per cent owing to the COVID pandemic and the world has become 15 per cent poorer when compared with the pre-pandemic period, Dr Mahapatra highlighted.

He said that Odisha has tremendous scope for MSMEs. “If we have to upscale our growth, we have to see the village economy and SMEs that can be affordable and generate about 40 per cent employment opportunities and contribute significantly to the growth of the state’s GDP.

Expressing his insights on the National Education Policy (NEP) 2020, Dr Mahapatra said, the new education policy talks about quality education, innovation and holistic development which is a long process. “However, we lack in implementation of things and have a result-oriented function. Industries must invest in institutions to develop incubation centres and skill-based learning to better prepare the students for the optimum contributions in MSME sectors and other industries,” he added.

Jayshree Mohanty, President, Luminous Infoways, Member Startup Task Force, Government of Odisha said that the state government’s initiative for launching startup taskforce and O-hub platform for the entrepreneurs has been able to create over 1200 recognised startups in the state. Of these 1200 startups, 502 are women-led.

It is evident to note that MSME’s have the potential to create maximum employment in the next five years. Therefore, the growth onus of people getting employed will lie with the MSMEs. Looking at the challenges faced by the sector, especially during the COVID pandemic, the government should take initiative to constitute a special purpose vehicle (SPV) for MSMEs and entrepreneurs that will contribute significantly in the ease of doing business in the state and give a boost to the idea of Atmanirbhar Bharat which is the vision of our Prime Minister.

When the Centre rolled out the Aamanirbhar Bharat package to aid the MSMEs during the pandemic, many MSMEs were able to benefit from the impetus. Meanwhile, for some enterprises situated in the far-flung areas of the country, the benefits were delayed. One of the possible reasons for the delay could be the lack of awareness of the government schemes and so many of them applied for the schemes late. “The whole industrial ecosystem has to correlate and collaborate to see that MSMEs sustain in the best manner possible so that more and more employment can be generated for the people in the state,” Mohanty highlighted

Emotions Over Electronics for E-Businesses in India

Dr Suresh A Shan, Head-Innovation and Technology, Mahindra & Mahindra Financial Services said that the technology has progressed in a manner that the Micro, Small and Medium Enterprises (MSMEs) get benefited through the earn to pay model. Before the pandemic, corporate digitalisation was the priority, but now the focus has shifted to customer digitalisation.

“If we look at the technology transformation, we look at cloud-based solutions that have emerged from private cloud or public cloud or a hybrid cloud. The latest innovation is the community cloud which allows MSME’s to come together with their product and services and also make it easier for financial sectors to make the process further easier,” Dr Shan highlighted. Therefore, the earn to pay model will do a lot for MSMEs wherein it will create more in terms of aggregator platforms that will enhance the matchmaking, inclusive access to all, and create benefits such as anytime anywhere access.

Sharing his perspective on leveraging technology to aid MSMEs, he said, “We need to focus on creating a digital platform in between the customer and the corporate & customer and the government which removes the middlemen and takes forward the trend of marketing balance. The technology must be made simpler which is understandable to the population in rural areas and ensure the last mile connectivity. Finally, the most essential aspect for e-business or technology-based businesses in India is it should be less to do with electronics and more to do emotions.”