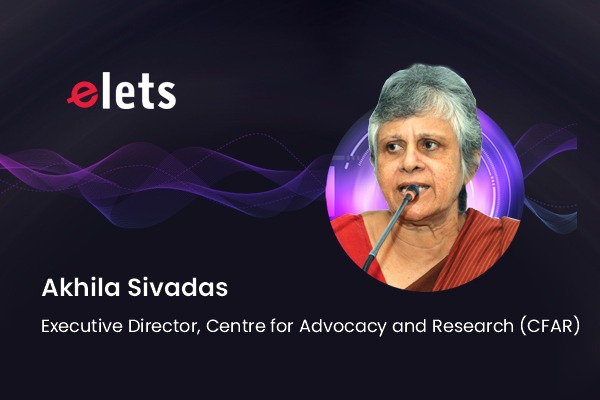 The SDG India Index & Dashboard 2020-21, released in the backdrop of the pandemic by NITI Aayog and United Nations, presents a mixed picture on the targets to be met on Sustainable Development Goal 11. The two key national indicators, corresponding to the global SDG target 11.6 to reduce the adverse per capita environmental impact of cities by 2030, are the percentage of municipal solid waste processed to the total waste generated and installed sewage treatment capacity as a percentage of sewage generated in urban areas, writes Akhila Sivadas, Executive Director, Centre for Advocacy and Research (CFAR).

As per the SDG India Index & Dashboard 2020-21, 68.1 per cent of municipal solid waste gets processed against the target of 100 per cent which is a dramatic rise from 17.97 per cent in 2016 (Sustainable Development Goal, National Indicator Framework, Progress Report, 2021). While on the installed sewage treatment capacity front, it recognizes the country’s capacity to treat is just 38 per cent of the total sewage generated.

In the light of these revelations, we need to look at the efforts the Swachh Bharat Mission has made in active collaboration with people’s participation to strengthen liquid and solid waste management and reduce the adverse per capita environmental impact on cities. This ambitious journey, which began in 2016 at the policy and strategy development level, soon led to many enabling processes at the institutional and community levels as well.

With the new rules, having mandated the Urban Local Bodies (ULBs) to set up Material Recovery Facilities with enough space to sort out the waste, the systematising of the door-to-door collection by the municipal authorities and source segregation by the community has begun to pick up the pace. Urban Local Bodies (ULBs) are partnering with Self-help groups, waste pickers and waste collectors to segregate the recyclables and they are also setting up Micro Composting Centres to compost the wet waste. Of the 84,475 Wards, 81,135 have systematised door–to–door collections (MoHUA, 2020). In Odisha, in the post-COVID context the Urban Wage Employment Initiative (UWEI), the urban counterpart of the National Rural Employment Guarantee Act (NREGA) being implemented by the Mission Shakti Department, and Urban Local Bodies, have enabled the self-help groups and informal workers to be engaged in remunerative work in areas like sanitation and other intensive public works projects.

In many parts of the country, this has given a fillip to developing an integrated solid waste management approach from waste minimisation and reuse at the user end to recycling, composting, waste to energy to safe disposal at designated landfills. In fact, multiple campaigns have been launched every year to raise awareness and foster behaviour change so that source segregation gets adopted en masse. However, the litmus test is when it motivates the community to be a part of the solution. We found wherever campaigns were followed by concrete measures to do something that involved the community, they always seized the opportunity and took full ownership. To cite an example, the Bhubaneswar Municipal Corporation has thus far developed 22 Micro Composting Centres (MCC) and two Material Recovery Facilities (MRFs). Nine NGOs are partnering with the Self-help Groups (SHGs) to ensure proper solid waste management across the 67 wards. The impact is evident in the fact that in the case of 83 slums, in the North Zone with 30,945 households (1,39,252 population) we find that it generated 23,49,000 tons of waste. These findings were under the collective leadership of seven SHGs facilitated by a team of seven supervisors and the NGO (CFAR). Of the total, 21,84,570 tons of waste was composted and the rest is disposed of safely. Prior to this at the slum level, the Swachh Saathis, Community Management Committee, and Supervisors did concerted social mobilisation and in the process when they found sections of the community were unhappy with the service, they listened to the problems people were facing and consulted with them to develop a route map for the waste collection vehicle. It was decided where it will be parked so that residents from inner lanes could hand over their waste.

Having said this, it is also clear that much more needs to be done to make source segregation a universal practice and to develop an integrated solid waste management process. The SDG India Index and Dashboard 2020-21, pins source segregation at 78.3 per cent. Moreover, with installed sewage treatment capacity being at 40 per cent, the Government of India recognised the gaps in safe sanitation coverage and went beyond ODF and shaped ODF + and ODF ++ protocols to strengthen the off-site safe sanitation services. They walked the talk by integrating it into Swachh Survekshan and resourcing it through financial allocations for infrastructure development and improvement of FSSM services.

Meanwhile, the challenges posed by the pandemic, especially for the urban poor and sanitary frontline workers in the riskiest work environment, are enormous. Given the hazardous conditions they are exposed to while emptying pits/tanks and cleaning sewer lines the law – Prohibition of Employment as Manual Scavengers and their Rehabilitation Act, 2013- banning manual scavenging and ensuring the safety and dignity of sanitary workers is at the centre of the process of formalizing FSSM services. In fact, everything from ensuring their occupational safety, social protection, retraining them to transitioning them from informal to formal work and ensuring that they have a say in their rehabilitation is being recognised as integral to ensuring safely managed sanitation.

In Odisha, the Garima Scheme 2021 was launched to ensure the safety and elimination of all indignities caused by manual scavenging. This coupled with the Safaimitra Suraksha Challenge, a national competition launched in 2020 to encourage cities to phase out manual scavenging and strengthen the practice of mechanised cleaning of septic tanks and sewers has changed the lives of sanitation workers like Chandan Naik and Bandhan Naik in Bhubaneswar.
Having been trained in mechanised cleaning and secured a loan to procure a 2000 litre cesspool vehicle from National Safai Karamchari Development Corporation (NSKDC), they have together, in the last four weeks, emptied over 100 pits and doubled their daily earnings from Rs 500 to Rs 1000. Many more sanitation workers are in the process of becoming entrepreneurs so now the challenge is to ensure greater demand generation. The Community Management Committees set up at many slums and Single Window Forum members functioning across many wards will raise such awareness, create demand and scale up demand generation using the QR code. And also display on the Saniwall-a dashboard, to be set up at each ward office the weekly performance of each of the water and sanitation service, assess it collectively and do course correction.