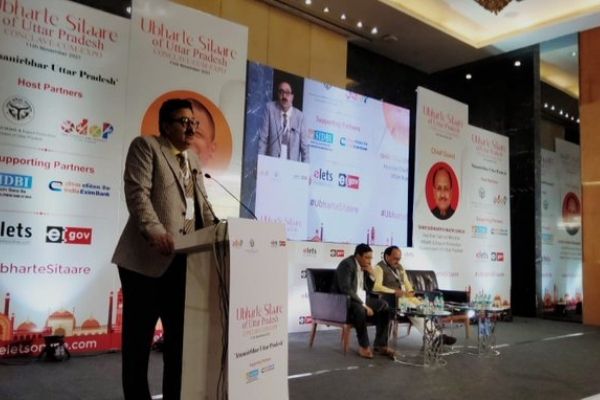 In his Keynote Address at the summit, Navneet Sehgal, Additional Chief Secretary (ACS), Department of MSME and Export Promotion, Government of Uttar Pradesh said, “Uttar Pradesh is to some extent is a disadvantaged state in terms of exports because its landlocked and so cannot compete with the coastal states. However, we have been doing extremely well in the past four and half years and our exports have jumped by almost 38 per cent.” Despite the COVID pandemic and lockdowns, Uttar Pradesh’s export numbers did not dwindle but went up by almost 1000 crore compared to the previous year, he added.

“Uttar Pradesh has a huge potential in exports sector”, the ACS, MSME & Exports, said. Many of our exports are not accounted for by Uttar Pradesh as they get exported from Delhi, Sehgal added.

Throwing light on UP’s way forward and near future targets concerning the state’s exports, he mentioned, “Our target is to increase the exports to at least 3 lakh crore in the next three years and for that Ubharte Sitaare is a promising scheme. I thank Indian Exim Bank and SIDBI for sending their officers to elaborate on the scheme and propose the handholding exercise to the mass audience through such forums.”

“Our target is to increase the exports from Uttar Pradesh to at least 3 lakh crore in the next three years.”

“We’re taking the Ubharte Sitaare scheme to every district. Combining this with the One District One Product (ODOP) programme of the state government we have identified 67 products from each district of the state.” The state authorities have carried out a diagnostic study on each district for each of the identified products that include the SWOT analysis of the products. Through this study, it was found that there are a lot of hard and soft interventions needed. Soft interventions like working on policies and Ubharte Sitaare was one of the most needed soft interventions.

Navneet Sehgal pointed out that “During our discussion with the exporters we observed that there was significantly less knowledge of financial opportunities available to them. They were still working on the traditional methods. Therefore, though we have new instruments of finance available, large exporters in small towns are unaware of the developments and facilities. However, on the brighter side, during the COVID-19 pandemic a lot of opportunities came in for our exporters and many of them have leveraged this chance.” He also shared an anecdote where he mentioned that an exporter based in UP, whom he met recently, received a bulk order for the parts of high-end luxury cars.

“There’s a huge scope in the export sector in Uttar Pradesh. To tap this potential, we have also devised a district-level export plan that has possibilities and opportunities. Also, there are certain issues that need to be addressed and the Government of Uttar Pradesh is working in the direction,” Sehgal said. 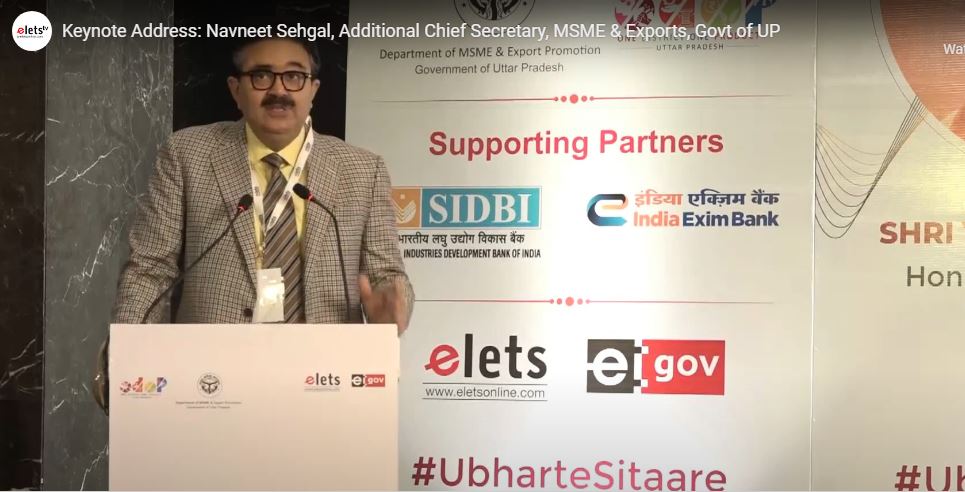 He laid emphasis on reaching out to exporters at the division level and district level and said, the Export Promotion Council of UP should get involved with the two organisations (India Exim Bank and SIDBI) and reach out to exporters at the divisional level to help them understand the Ubharte Sitaare scheme, identify units that can be supported under the scheme, and make the exporters aware of the new innovative instruments of finance to strengthen their operations.

He urged all the government officials attending the summit and the audience to attend the entire event and understand the Ubarte Sitaare scheme from the speakers’ deliberations and gain insights on boosting exports in the state of Uttar Pradesh.

In the past year, the export council has registered over 1000 new units. This is evident enough to see the huge untapped potential lies in the state of Uttar Pradesh in the exports sector. He proposed a helpline for exporters and asked the India Exim Bank and SIDBI to look into the possibilities of setting up such a facility for exporters. “We would be happy to start a helpline for exporters where we can resolve their queries, help them with various schemes, and more,” he said.

We would be happy to start a helpline for exporters where we can resolve their queries, help them with various schemes, and more.”

On the policy reforms to support exporters, Sehgal said, “The Government of Uttar Pradesh, on the policy level, is also working to ease business for exporters. We’re trying to ease the freight subsidy. Also, earlier the subsidy was not on trucks but we have now included that in the policy and now the freight movement through trucks to the ports will be subsidised.”

Expressing delight, Sehgal mentioned that Flipkart sold Rs 1000 crore worth of products under Uttar Pradesh’s ODOP scheme. Further, he said, “After this grand success we also wanted to open up e-commerce platforms for our exporters and so we have inked a pact with Amazon.com.”

He informed the audience that the Government of Uttar Pradesh will be taking forward the consultation aggressively for the exporters to provide them with apt support and awareness on government schemes and benefits.