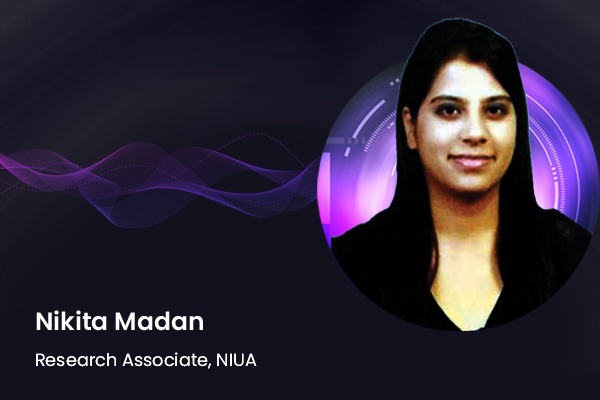 The number and severity of flooding events in India have risen over the last several years. The 2021 floods in Kerala, Uttarakhand, Assam, Tamil Nadu, and Maharashtra are very recent examples, which have brought cities to a virtual standstill. The recently launched sixth assessment report¹ of the Intergovernmental Panel on Climate Change (IPCC) projects a gloomy scenario of extreme flooding in several coastal cities of India by the year 2100, caused by a mix of heavy precipitation and sealevel rise, write Nikita Madan, Research Associate, NIUA and Shivani Saxena, Environment Planner, National Mission for Clean Ganga (NMCG). 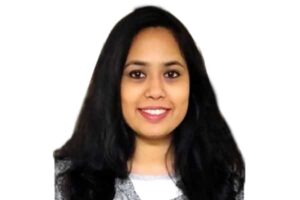 The National Disaster Management Authority2 (2019) warns that almost 1² per cent of India’s land is prone to flood and river erosion. Primarily concentrated in specific areas of the Ganga Brahmaputra floodplains and along the east coast, these flood-prone areas cover as many as 5,161 ULBs, many of which are important to economic centres.

When climate change concerns are added to the equation, the situation becomes even more alarming. It is, therefore, vital for immediate action to clearly understand these trends, assess vulnerabilities and establish response mechanisms to mitigate these risks. One of India’s strongest signals to prioritise climate change action was in 2014 when it renamed the Ministry of Environment and Forests to the Ministry of Environment, Forest and Climate Change. It also became a signatory of the Paris Agreement in 2015 and committed ambitious targets under its nationally determined contributions. Accordingly, the country developed a National Action Plan on Climate Change (NAPCC)³, which is represented by eight national missions for multi-pronged, long-term, and integrated strategies to combat climate change. Taking adequate and appropriate action for flood risk reduction and management has been strongly emphasised in some of these missions, such as the National Water Mission.

In 2009, the Indian States and Union Territories (UTs) were called upon to expeditiously prepare their State Action Plans on Climate Change (SAPCC) consistent with the strategy outlined in the NAPCC. As a result of this directive, the States and UTs began an exercise of mapping state-wise climate vulnerabilities, evaluating the sectoral implications and framing actionable strategies. Currently, 33 SAPCCs (except Goa, Dadra & Nagar Haveli, Daman & Diu, and Ladakh) endorsed by the National Steering Committee on Climate Change (NSCC) have been placed in the public domain⁴.

After a comprehensive examination of each of these SAPCCs to cull out the strategies for flood risk reduction and management proposed by the various States and UTs, this article tries to succinctly highlight the strategies adopted (and corresponding actions) by a majority of the States and UTs. The analysis is categorised under three heads: 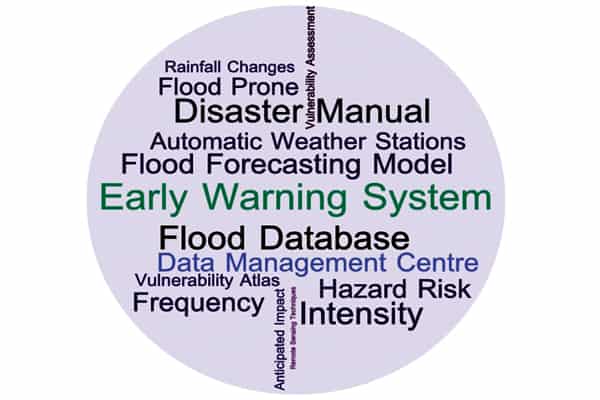 Assam has highlighted the need for a specific manual for disaster risk reduction to avoid wildlife mortality during floods.

Other strategies proposed by the States and UTs under this category include creating a Data Management Centre and applying remote sensing techniques to identify vulnerable populations in relation to flooding. 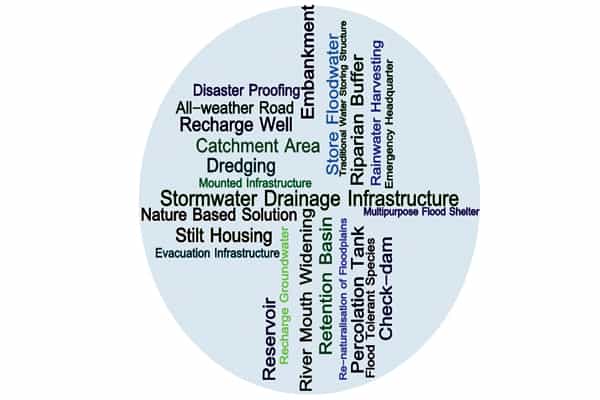 Some states like Haryana, Karnataka, Kerala, Lakshadweep, Maharashtra, Manipur, Odisha, and Uttar Pradesh have encouraged nature-based solutions to mitigate the flood risk like restoration, protection, and re-naturalisation of floodplains by creating riparian buffers with flood-tolerant species.

In addition to these, there are some unique strategies adopted by the States and UTs in their SAPCCs. For example, Odisha recommends dredging and widening the river mouth as a means for flood risk mitigation. Assam propagates mounting of community bio-toilets and WTPs for flood-affected areas; West Bengal recommends building elevated storage mechanisms for potable water to avoid mixing with saline water during floods and raising the existing houses in vulnerable areas on stilts based on likely flood water ingress. Some States also recommend rainwater harvesting and construction of check-dams/ embankments wherever feasible; as other development initiatives for improving flood management.

Some actions proposed by States under this category are very site-specific. For example, Puducherry and Lakshadweep have advocated the construction of a multipurpose flood shelter. Likewise, Andhra Pradesh has proposed allweather road connectivity for evacuation emergencies. The Andaman & Nicobar Islands and West Bengal have stressed disaster proofing of lifeline infrastructures such as health centres/ hospitals, offices, emergency headquarters, and schools.

Several States and UTs have recognised the value of integrating flood risk reduction into long-term urban planning to ensure long-term and sustainable actions. Maharashtra is one such example that has advocated risk-informed planning to safeguard its cities against disaster threats. Jammu and Kashmir, Kerala, Manipur and Odisha suggest the preparation of ‘climate-friendly master plans’ and ‘climate responsible master plans’ for cities and towns prone to flood risks. Chhattisgarh and Tripura recommend reorienting urban planning to address climate change and disaster risks, while Madhya Pradesh talks about capacity building to integrate climate change concerns in city planning. 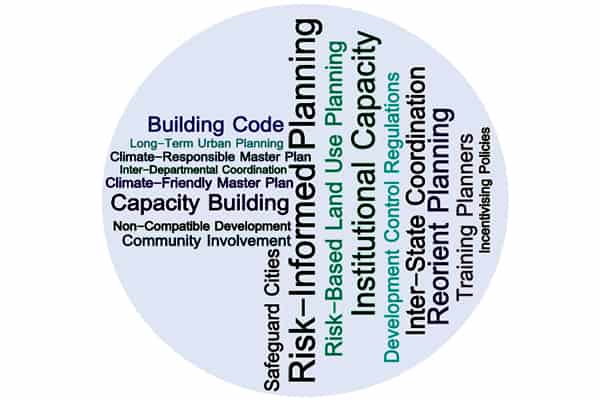 The SAPCCs, as a primary policy document and a collective initiative by states, have laid the foundation for protecting the population, preventing economic losses, safeguarding the poor and vulnerable communities, and securing cities from the impacts of flooding. However, as the adage goes, “A Plan is only as good as its implementation”. Hence, it is vital that States put in place tangible mechanisms to translate the Plan’s ambitions into practice. To do so will require action on multiple fronts. First, establishing institutional mechanisms for coordination and cooperation between line agencies concerned with flood management. This is critical for damping the impact of flooding events and effecting a timely response to unprecedented circumstances. Second, building capacities of concerned stakeholders in ‘integrated’ and ‘holistic’ management of flood risk using a systems approach. Third, leveraging on rapidly improving technology to aid in quick decision making. Fourth, and perhaps most importantly, identifying and preparing for an acceptable level of risk, given that it is virtually impossible to flood-proof cities, especially in the context of climate change.

If the severity of floods in the States of Uttarakhand, Kerala, Maharashtra is the visual montage of climate change, then the sea level rise drowning coastal India is the silent reminder of the power of climate change. With future projections already ringing warning bells, the need of the hour is for different stakeholders, including residents, to step up and take collective responsibility to alleviate the threats of floods in our cities.