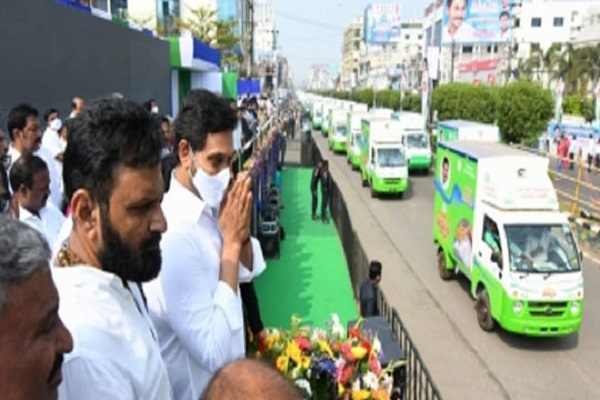 The Government of Andhra Pradesh has launched a new initiative to deliver ration provisions to the beneficiaries at their doorstep through mobile delivery vehicles every month. The initiative is being considered as the first of its kind public distribution system in India.

At a cost of Rs 830 crore annually, 9,260 vehicles are being deployed to deliver ration provisions to the beneficiaries at their doorstep. Naming these vehicles as Mobile Dispensing Units (MDUs), Chief Minister YS Jagan Mohan Reddy flagged off 2,506 of these at Vijayawaday’s Benz Circle on January 21. The MDUs will will begin distributing the ration provisions from February 1.

The state government paid Rs 539 crore towards the subsidy for 9260 vehicles and provided these to the unemployed youth of SC/ST and backward classes through a 60 per cent subsidized loan. These MDUs are specially designed vehicles for weighing and distribution of provisions.

Each MDU costs Rs 5,81,000 of which the government pays Rs 3,48,000 as subsidy component and the owners have to pay Rs 58,000. Moreover, the state civil supplies department will pay the rental for 18 days a month, a part of which will be paid towards bank EMI and the maintenance cost to the owner.