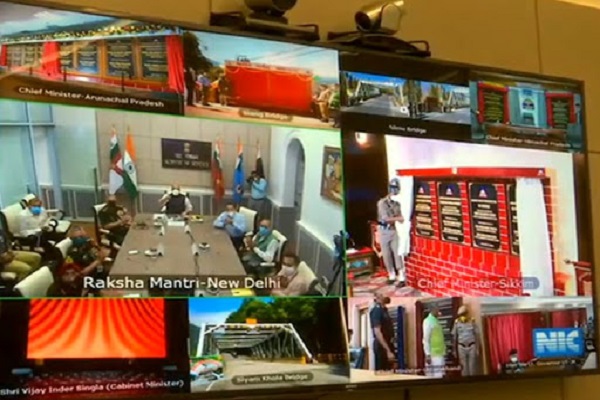 PWD Minister of Punjab Vijay Inder Singla with Union Defence Minister Rjanath Singh jointly inaugurated the much-needed four bridges – three in Gurdaspur district whereas one in Fazilka. These bridges were much-needed with regard to security point of view and the local populace of these border districts.

At the inaugural ceremony, Vijay Inder Singla said that the construction of these four bridges in the state will not only provide economic and social development of the border areas but will also strengthen the security for the entire country. “Captain Amarinder Singh-led Punjab government is fully committed and dedicated to providing the thrust to the overall socio-economic reforms in the state”, he added.

Divulging the details of the bridges, Singla said that in district Gurdaspur, 483.95 m long Multi-Cell Box Bridge (Submersible) across river Ravi near Dharamkot Pattan at Kasowal on Ghonewala-Rasulpur road will provide the much needed all-weather connectivity to the defence forces and will increase their OP preparedness. Also, the numerous villages in Kasowal Enclave along the border will be socially and economically connected to the main towns. Further, this bridge will connect the enclave that lies along the India-Pakistan international border to the rest of India.

Similarly, the 42.96 m long Baju Bridge on Dogra Mandir-Parole-Janiyal-Bamiyal in district Gurdaspur is double lane span Multi-Cell Box Bridge constructed departmentally, which will provide connectivity to the Army deployed on the International boundary. There are numerous villages en route, as also many border villages are being provided with the much-needed connectivity by this road. This road is also linking NH-1A in J&K (UT) to Punjab state and further leading to international boundary. He said that this road crosses water-gap, which was not trafficable during monsoon season, thus leading to disruption in the normal routine life of locals and also affecting operational efficiency of the armed forces. The work for the bridge was commenced in May 2019. Although the smooth execution of the work was a challenge amid the heavy traffic and rainfall due to the hard work of the PWD department and persistent efforts of the team, the 42.96 m long bridge was completed in a record time of five months.

PWD Minister further added that the third bridge in district Gurdaspur is 30.20 m long ‘Shingarwan Bridge’ on Parmanand-Taragarh-Kathlaur-NJS-Parole. Constructed departmentally, this bridge will provide connectivity to the Army deployed on the International boundary besides numerous villages en-route. This road is also linking J&K (UT) with Punjab and also provides an alternate route of NH-1A from Pathankot to Jammu. He said that during most part of the year due to heavy flow of water in the Nallah, the road Parmanand-Taragarh-Kathlaur-NJS-Parole was not trafficable thus leading to disruption in the normal routine life of locals and also affecting operational efficiency of the armed forces. Keeping in view the importance of this road and also from the strategic point of view as well as the dependence of large civil population, construction of the bridge was felt necessary and the bridge was completed in a record time of nine months.

Giving the details of the bridge in district Fazilka, Singla said that 40 m long Steel Superstructure Bridge was built at Sabuna-Mauzzam and will connect Khanpur to Keryan village along an existing PWD road from Fazilka to provide connectivity to the villages located in border areas. He said that the new bridge has replaced the old Extra Wide Bailey Bridge (EWBB), built in1972, due to its limited load classifications. This bridge will benefit a large section of the population located close to the border by giving a boost to agriculture and improve the Socio-economic development of the area.