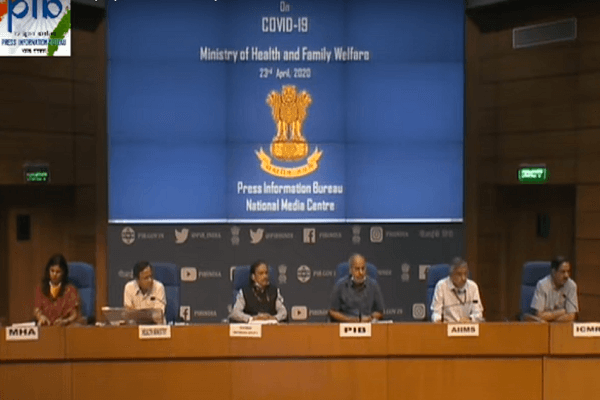 The Government of India, considering the growth in the number of people recovered from COVID-19, said today, April 23, the COVID-19 growth in the country has been more or less linear and not exponential. The Government reasoned out by saying that the effective strategies implemented in India have impacted the growth of the viral pandemic. Moreover, the country had fared much better than many developed countries like the United States and the UK.

The recovery rate in the country has been on the rise to reach close to 20 percent with 4,257 people of the 21,393 infected have recovered as of yet including 388 who were recovered yesterday, April 22. The Centre presented the analysis of India’s containment strategy during the daily media briefing by the officials of the Ministry of Health and Family Welfare (MoHFW).

Lav Aggarwal, Joint Secretary, MoHFW said that the list of districts which have reported no new COVID-19 positive cases in past 14 days has now swelled to 78 with the addition of eight new districts.

As amny as 1,409 positive cases have been reported in India in the last 24 hours which has taken the total number of active cases to 16,454, he added.

A member of one of the empowered groups formed to plan, implement and coordinate the country’s response to the pandemic also participated in the briefing. He said that the last 30 days of national lockdown indicate that India’s containment efforts have been successful to a large extent.

The official added, “We have been able to cut transmissions, minimize the spread and increase the doubling rate. We have also been able to consistently ramp up our testing and have utilized this time to prepare ourselves for the future challenges the virus may present.” Further, he said that the percentage of positive cases and the number of tests conducted remained the same more or less in the last 30 days which indicative of that there was no exponential jump in infections.

Elaborating on the containment strategy, the official said that India had successfully decentralized its response to COVID-19 by roping in the private sector and empowering districts to be at the forefront of the fight against Coronavirus. Moving on the government’s first strategic goal is to ensure that people don’t have to visit hospitals for treatment of coronavirus and it is achieved by practising social distancing, follow the lockdown norms and following other prevention measures like using masks.

Secondly, the Government is putting in efforts to create enough infrastructure and health facility for every person who has to visit hospital for COVID-19 care.