The deployment of Technology has been one of the turning points in the Transport Sector in mainly two ways. In terms of serving the commuters, the real time information from the Electronic Ticketing Machines are analysed at the Electronic Data Processing Centres (EDPC) for the state-run buses – Kerala State Road Transport Corporation (KSRTC), says K R Jyothilal, Principal Secretary, Department of Transport, Kerala in this exclusive interview with Elets News Network (ENN).

Give us an overview of the Transport Sector of Kerala.

Major transport infrastructure of the State consists of 2.29 lakh km of road, 1588 km of railways, 1687 km of inland waterways and 18 ports with 585 km coastal route and four airports. Roads play a prominent role in public transportation vis-a-vis-other modes of transportation owing to the geographic peculiarities of Kerala with a comparatively lesser rural-urban divide and limited geographical area of 38,863 Sq. km.

Kerala has a total fleet of 20,452 buses; of which 14,499 are private buses (71 percent as on 2019) and 5,636 buses belonging to Kerala State Road Transport Corporation (KSRTC) buses (27.55 percent). Private buses dominate transport in all districts of Kerala except Thiruvananthapuram.

The state has a rail network of 1,257 km route length with a total track length of 1,588 km, operating under the control of Palakkad and Thiruvananthapuram Railway Divisions. In Kerala, there are many water bodies like rivers, lakes, estuaries, backwaters, etc. providing adequate scope for Inland Water Transport (IWT) system of 1,895 km length to connect the rivers from one to another. Transportation by IWT is considered as the most efficient economic and environment-friendly means of transportation.

Transportation by coastal shipping is the mode for most bulk commodities and long hauling traffic. Kerala has the advantage of a 585 km coastline through which bulk cargos can be transported using multi –modal transshipment points along the coastline. Kerala has one major port at Kochi, 17 minor ports and an upcoming international shipping terminal at Vizhinjam. Out of the 17 minor ports in Kerala, four are considered intermediate ports viz., Vizhinjam, Beypore, Azhikkal and Kollam based on berthing, cargo handling and storage facilities available in them. Kerala has four international airports viz., Thiruvananthapuram, Kochi and Kannur. All civilian airports functioning in the state are international airports, a feature unique to Kerala. Realising the advantages of mass transport system in meeting the intra city commuter needs of major cities, Government of Kerala has embarked on Metro Rail Project for Kochi. With the commissioning of Mass Rapid Transit System (MRTS), major urban corridors are expected to be decongested in these cities. (Economic Review, 2018 – Kerala State Planning Board, GoK)

What are different sections or modes of transport covered under the Kerala Transport Department?

The various modes of transport covered under the Department of Transport, Kerala are:

District wise bifurcation of private buses across the state is as follows:

How is the Transport sector of Kerala different from that of other states?

Major differences which differentiate Kerala’s transportation system with other states are manifolds. So, Kerala has a number of towns at shorter intervals, due to wide-spread urban agglomeration, especially at the plains and western parts of Kerala. Hence, transport solutions are to be tailormade for Kerala. Also, the stretch of the roads is such that the road widths are narrower with NH being 30m RoW at major stretches of the state. Private operators have an increased share in the fleet strength, ridership etc. for bus operations in State. Average public transport share in Kerala is still higher than other states, thereby high dependence on the Public Transport Operations.

Kerala is one of the first states to introduce ‘One Nation, One Card’, issued by National Common Mobility Card (NCMC) issued in the bus and metro systems and first among the states to introduce on a scaled manner. Cochin International Airport is fully Solar powered Airport Operations.

How do you ensure proper streamlining and management of the various aspects of the Department?

The respective departments under the Transport Department, Kerala, have well defined individual management system. The offices are computerised with up to date reporting mechanism. In the transport department, e-File system exists for streamlining of various aspects of the department. Meetings at regular intervals of respective sub-departments ensure the efficient management of work.

Has there been deployment of technology such as Artificial Intelligence, Block Chain, and Machine Learning etc.? How has it contributed in serving the commuters better?

The deployment of technology has been one of the turning points in the Transport Sector in mainly two ways. In terms of serving the commuters, the real time information from the Electronic Ticketing Machines are analysed at the Electronic Data Processing Centres (EDPC) for the state-run buses. Thereby, the routes are modified and rationalised based on the demand to cater the need of the commuters and increase the operational efficiency of the transport system. In terms of the researchers and the general public, the KMRL, had opened up the data in the machinelearning format of GTF (General Transit Feed) specification. Thereby, there has been multiple researches and technological upgradation possible with the proposals from the general public. This has made the system to function and serve the passengers better. KMRL along with Rajgiri School of Engineering & Technology (RSET) is presently working on a Big Data Analytics project on public transport, funded by Department of Science & Technology.

Are you planning to introduce or already introduced electric vehicles or any other measures to curb environmental pollution?

The government of Kerala has finalised an electric vehicle (EV) policy for the state. The Cabinet approval came with some changes in the draft policy. One of the main aims of this policy is to procure 6,000 electric buses for the state road transport corporation by 2025.

Kerala government has organised three events on promotion of mobility with focus on public transport and paving the way for electric mobility. The first such event, ‘Rethinking Urban Mobility’, a seminar co-hosted by WRI-India was organised in Trivandrum and Kochi in 2018. Secondly, a stakeholder seminar was organised to discuss the draft E-Mobility policy in Dec 2018 and in 2019, the final E-mobility policy was rolled out by the government. The third event in its series was the ‘Kerala Electric Mobility Conference and Expo’ (EVOLVE) in June 2019, facilitating a common platform for OEMs, dealers, solution providers in charging Infrastructure, power distribution companies, buyers and financial institutions to create a paradigm shift in the electric mobility in the state. During this event, the Kerala Automobiles Limited (state PSU) and  HESS (Swiss bus manufacturer) has exchanged MoU for manufacturing of E-buses in the state which could promote faster adoption of electric buses especially for the fleets owned by KSRTC and Kochi E-bus limited.

Not long ago, Kerala was struck by massive floods. How did this aggravate the state’s transport sector and department and how did the department cope with the situation? 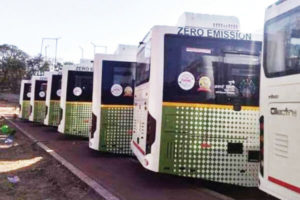 About 2,004 km of State Highways and 13,246 km of MDR across 14 districts had suffered varying degree of damages during the recent floods. The NH wing had estimated damage of about 580 km of NHs. The post flood impact analysis indicates heavy damages due to land slide/slips in the roads in four hill Districts of Idukki, Wayanad, Pathanamthitta and Palakkad, whereas roads in the seven districts of Alappuzha, Thrissur, Ernakulam, Kozhikode, Malappuram, Kollam and Kottayam have sustained flash floods, erosion, water stagnation and other flood induced damages.

“The government of Kerala has finalised an electric vehicle (EV) policy for the state. The Cabinet approval came with some changes in the draft policy. One of the main aims of this policy is to procure 6,000 electric buses for the state road transport corporation by 2025.”

The overall cumulative damages for State Highways and MDR was estimated to be Rs 7,647 crore and for NHs an additional need of Rs 911 crore has been assessed. The State Government had started providing immediate short-term repair of pavements and cross drainage structure, clearance of debris and temporary protection works to restore the access and keep the roads traffic worthy. The rehabilitation of the lightly damaged roads was largely through measures like pothole patching, to keep the roads traffic worthy. 7,197 km of roads (734 km of SH and 6,463 km of MDR) were severely damaged but was recoverable. 36 major and 178 minor bridges, 362 culverts, 43 km length of retaining wall and 169 km of roads side drainage works were severely damaged. Reconstruction of bridges and culverts were assigned on priority followed by adequate hill slope protection and flood protection works.

There were additional public transport services, providing the facilities and transport need for the people. Metro operated on a no fare basis thereby helping to transfer the commodities and passengers along the water logged city centre of Kochi, thereby helping to cope with the situation.

What are the other areas of challenge faced by the department? 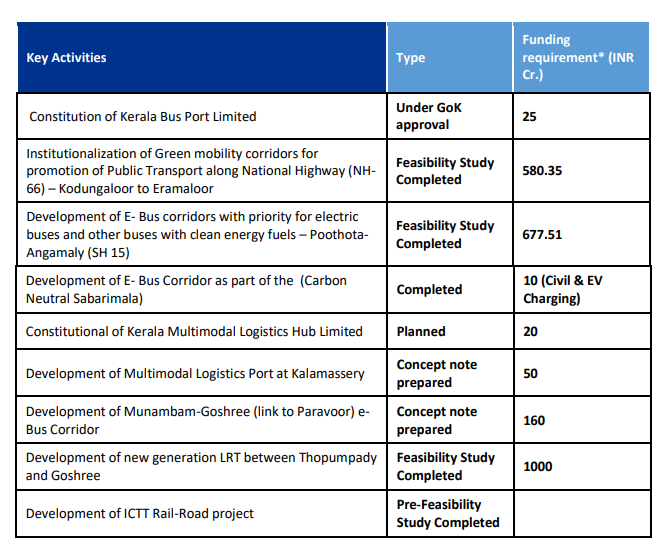 Well, talking about the road blockages, there are many on the platter. With increasing trend of leading luxurious lifestyles, increasing trend in personal vehicle registration is surging on the go. Roads are being filled with more and more personal vehicles. This is because of the poor condition of public transport and lack of incentives to use public transport. The obstacles haven’t come to end terms as yet, other such issues include inadequate augmentation of road infrastructure, reduced dependence on inland water network, poor non-motorised transport, congestion in metropolitan areas, etc.

Please mention some of the innovative initiatives taken over the past few years?

Kerala Metropolitan Transport Authority is under formulation, the respective bill was placed for discussion, before the Legislative Assembly and it is expected to pass by next Legislative Assembly Session. The authority would have a complete control on all modes of transport in Urban area and other connected infrastructure. 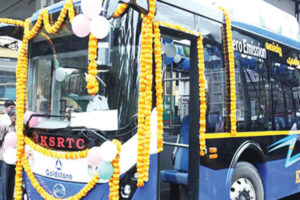 As a pilot, in Kochi buses were equipped with GPS enabled Vehicle Location Tracking (VLT) devices for providing input for a Journey Planner. The ‘Chalo’ journey Planner launched by the Transport Minister. The fragmented private buses made aggregated as seven units (One Society, One company and five LLPs) and provided in to Electronic Ticketing Machine (ETM) which can accept and the buses are also equipped with passenger Information System (PIS) with panic buttons for passage safety. These buses are also provided with on board surveillance Camera for ensuring safety of woman and other passengers. The processes have started for Driving License Cum Transit Card (Transit card embodied driving licenses). 15,000 auto rickshaws have been aggregated and formed to a single society. The society was inaugurated by Kerala Chief Minister of Kerala at Kochi. Now the society is controlling the last mile connectivity of Metro with E-rickshaw (of Kinetic Green). There are many future plans for the society of auto rickshaw drivers.

What are your plans in pipeline for the upcoming years?

Under the new policy, the state will promote the setting up of factories for making EVs, ancillary units and research facilities. Also the development of a Semi High-Speed Rail Corridor across the State is also in the trail. We are also on the mission of establishing a ‘Directorate of Mobility’ under Transport Department to reform the transport sector and invite investments and management of ‘State Mobility Fund’ and ‘E-Mobility Promotion Fund.