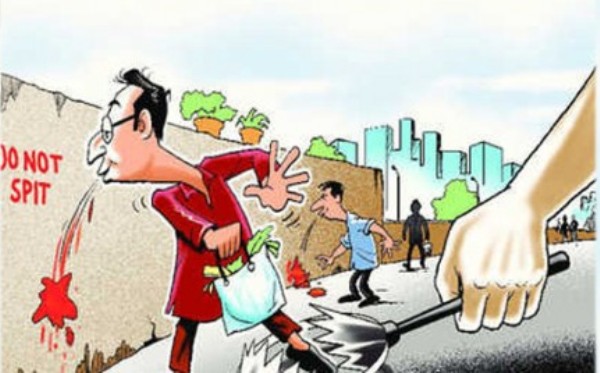 In what is being claimed as India’s first case of a civic body penalising a person for spitting chewing tobacco in a public place, the Ahmedabad Municipal Corporation (AMC) has fined one Mahesh Kumar after he was caught committing the offense on a CCTV camera.

The civic body fined Kumar for violation of public health laws, a press release said, in which AMC also claimed that this was “the first such case in the country”.

The municipal corporation issued an e-memo against Kumar, a resident of Naroda suburb, after he was caught on a CCTV “spitting chewing tobacco” at a traffic signal on April 5. Kumar has paid Rs 100 in fine to the civic body.

“By using the automatic number plate recognition system in the CCTV footage, details of the vehicle owner were obtained. Thereafter address was obtained from the RTO database. The memo was then dispatched by post on April 20, penalising Mahesh Kumar Rs 100 for the violation,” said the AMC in a press release.

According to a civic body official, violators are required to pay the penality within 7 days of the issue of an e-memo, failing which they would have to pay a higher penalty amount.

Ahmedabad had recently managed to get the first rank in Swachh Sarvekshan-2018, a national cleanliness survey conducted by the Ministry of Housing and Urban Affairs.