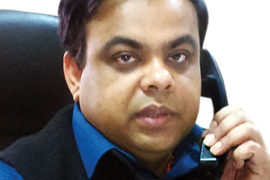 Subir Kumar, an IAS officer of Rajasthan cadre 1998 batch has now been appointed as the new Managing Director of Jaipur Metro Rail Corporation.

A mechanical engineer by qualification, he was earlier posted as Divisional Commissioner of Bharatpur.

He was also Divisional Commissioner of Bikaner in an earlier posting.

In 2012, he was Collector and DM of Hanumangarh.In a similar capacity, he has served in Tonk, Dungarpur and Barmer.

He started his career as Sub Divisional Officer at Pratapgarh.