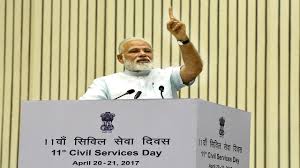 As many as 2010 applications have been received from 623 districts across States and UTs under Priority Programme category of the PM’s Awards for Excellence in Public Administration, 2018.

The awards will be conferred on bureaucrats on the Civil Services Day which is celebrated on 21st of April every year. The Awards are given to acknowledge the exemplary and innovative work done by the officers of the Central and State Governments in implementation of selected Priority Programmes and for Innovation in Public Governance.

A new category of awards for Additional Secretary, Joint Secretary, Director and Deputy Secretary level officers serving in the Government of India has also been introduced this year to recognize their contribution towards bringing about transformational improvements in processes and systems through simplification and process re-engineering.