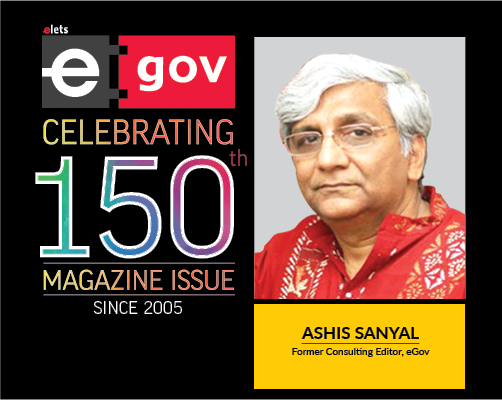 The eGov magazine, organised and published by Elets Technomedia, is now preparing for its 150th issue. It is very heartening news and it is a permanent record of great achievement for Ravi and his team. Anybody, who is somewhat associated with print magazine eco-system, would immediately appreciate how difficult it is to regularly publish 150 issues uninterrupted, each ranging from 48 to 64 pages, especially on a subject, which deals with the then (e-Governance started in a focused manner in Department of Electronics and Information Technology (DeitY) around 2002) a green field activity for the entire Government of India. Personally I have great memories of this e-Gov magazine, including about 18 months tenure as its Consulting Editor around 2011, after my retirement from the active service.

I still remember the day in December 2004, perhaps 18th December, in Jaipur, where a three-day Summit was being held on Capacity Building and Training for Panchayati Raj Institutions, IT enabled e-Governance for Panchayats, in the presence of the then Central Minister Shri Mani Shankar Aiyar. After I came down from the dais, completing my presentation on the concept of CSCs in Panchayats, a young girl approached me and identified herself as Anuradha from the Centre for Science, Development and Media Studies (CSDMS). She requested for some discussion time on the concept of a new magazine that CSDMS was planning to start, solely on the subject of e-Governance.

To be honest, at that time I had the fair share of doubts about the sustainability of such a print magazine on emerging and that time a ‘narrow’ subject of electronic governance, which I expressed to Anuradha later in our hour-long discussion. Anyway, that discussion on December 18, 2004 in Jaipur started my association with eGov magazine right from the time when it was being conceived. Interestingly, till that time I had not met Ravi Gupta personally and just knew about CSDMS!eGov magazine, belying my initial doubts, since it was brought out first time in early 2005, gained strength over the next few issues and by next one year or so it became a magazine of substance, among all the stakeholders, including the policy makers in the government. In the Department of IT,under the able stewardship of Mr Chandrashekhar, the then Joint Secretary (currently President of NASSCOM), we were launching several e-Government initiatives one after another and the eGov magazine almost became the sole platform, (except skeletal information occasionally going into the regular print media), to disseminate the detailed information of these programmes and projects to the public, through well-written articles by the team eGov.

Subsequently, success stories and interviews with the eGov champions from the States started getting published regularly, which served as the guiding beacons for the fresh practitioners and aspirant champions of the discipline. During those initial years, a young team of enthusiastic technology journalists, recruited by Ravi, strolled consistently in the corridors of the many government department buildings at any hint of an e-Governance project being planned by the departments, to bring early news to the magazine. This relentless effort on the part of the eGov team earned them quickly a distinction of an important non-state actor who strived to bring the news to the interested public about what was happening in the country on the e-Governance front. Looking back, currently when media is agog with so much excitement about electronic governance and digital India, I can now appreciate it better the great role played by the eGov magazine, the lone media outlet during those initial years, in spreading the positive vibes on the subject. It was so much necessary at that time.

Soon the second important aspect of communication and awareness was taken up by the eGov team, which marked initiation of another important era in spreading the message of electronic governance in the country, that is national-level conferences, christened ‘e-India’ conference, solely dealing with the subject of e-Governance. The team eGov established a regular knowledge-sharing platform in the form of focused national-level conferences, dedicated to the use of Information and Communication Technology (ICT) in the areas of governance, health and education. Within a year or two, conferences organised by eGov team became the country’s premier knowledge sharing platform on ICT for governance, education and health, where most of the champion project executors, thought leaders, senior officers from governments and ICT industry discussed and exchanged the current and future scenario of ICT proliferation in India in various sectors.

In a couple of years, beyond the Annual National Conference on eGovernance organised by the Government of India, e-India conference became the second best platform in the country where one could showcase the achievement or learn the discipline. e-India conference is always accompanied by a very well organised Exhibition, showcasing the software and hardware products and services in areas of ICT for governance, health, education and so on.

For the initial 2-3 years, attendance in e-India used to be so huge that to accommodate several parallel technical sessions and the huge exhibition area, soon the standard conference venue of India Habitat Centre was replaced by larger venues like Ashoka Hotel, Taj Palace Hotel, Pragati Maidan in Delhi, Hitek City Hyderabad and eventually it moved out of the country to Bangkok, Kuala Lumpur, Colombo, Dhaka, rechristened as eAsia Conference! I remember, once attending the ‘curtain raiser’ event on the previous evening of the 3-Day e-India Conference at the Taj Palace hotel, Mr Chandrashskhar and myself were taking a tour of the huge exhibition pandal at the hotel’s sprawling lawn (seldom they rent out the lawn for a pandal!) Mr Chandrashekhar remarked: “I am really amazed observing the organising and PR capability of Ravi Gupta” and I immediately seconded him. Eventually, I had attended till 2011 most of the National and International conferences organised by eGov team and I was also flabbergasted many times by appreciating Ravi’s cool demeanor in organising such a large international events with preparation time sometimes lasting for months.

I remember once at the conference venue Ramada hotel in Bangkok, a significant number of vegetarian Indian delegates were having serious problems with the South-Asian type conference lunch menu, right on the day one! We did not know what transpired between Ravi and the hotel management; thereafter we had yellow dal tadka, rajma, cauliflower curry, channa masala etc in the lunch for the next two days!

By that period, for better operational and financial conveniences, the Elets Technomedia was established and it took over the affairs from CSDMS. Conferences steadily increased in many numbers and got geographically spread over the country in the form of regional conferences on focused subjects, like Urban Planning, Cyber Security, Smart City etc. The scorecard of the eGov team in the area of knowledge-sharing conferences is mind-boggling; over 200 conferences so far in which 1,00,000 footfalls, over 4,000 different speakers in those 200+ conferences! In all these events, the eGov magazine played the vital role by meticulously documenting the conference proceedings and regularly disseminating all the related pre and post event information.

The eGov went with the time and online version of the eGov magazine had seen light of the day few years back. It quickly became very popular among eGov practitioners and the current monthly viewership is staggering 500,000!

Soon a well-designed portal followed to facilitate the activities related to numerous conferences organised throughout the year. Further, for many years now eGov team is carrying out evaluation of the outcome of successfully running eGov projects by an expert Jury and instituted proficiency awards for government departments, PSUs, industry and NGOs for meritorious projects in different categories.

Seventeen years for a national programme like e-Governance, to be deployed in a large country like ours, may be a small period of journey but for a print magazine to gather and disseminate useful information of 8,000 to 9,000 of the printed pages over 13 years cannot be a small feat.

During this 13 year-period, I suppose every IT secretary from our 35 States and also from the Central Government must have shared their experience on the pages of eGov magazine, including the Mission leaders of the Mission Mode Projects under National eGovernance Plan (NeGP). Every leading OEM expert from India must have explained on its pages the features of the company products. Leaders in the eGov and ICT4D consultancy agencies have reflected their opinions and strategic suggestions on the pages of eGov magazine. The copies of eGov magazine must have reached to each and every person who mattered in the implementation of e-Governance in the country.

Viewership of the online eGov magazine has already been mind-boggling high. The eGov team should draw immense pride from the fact that in this large country of so many government departments, Ministries, PSUs in the States and Central Government, their magazine stands towering high as a lighthouse, to throw light on any related issue on the subject of electronic governance. Even after 13 eventful years, none could come near to them!

On the eve of 50th issue of the magazine few years ago, I suggested Ravi that there could be a useful compendium by selecting 50 valuable time-tested articles published in all the 50 issues and it would a good reflective historical document on how the subject e-Governance was thought through in the country by the eGov champions in the initial years. He immediately agreed, requested me to undertake the editing work and sent me the soft copies of all the 50 issues within a week! I regret even today that I could not take up the work due to other commitments. But I still hold that view…today whatever has been there successful in the area of e-Governance in the country…that has been surely reflected sometime, somewhere, between the covers of some issue of the eGov magazine!

Kudos for the milestone of 150th issue dear friends!