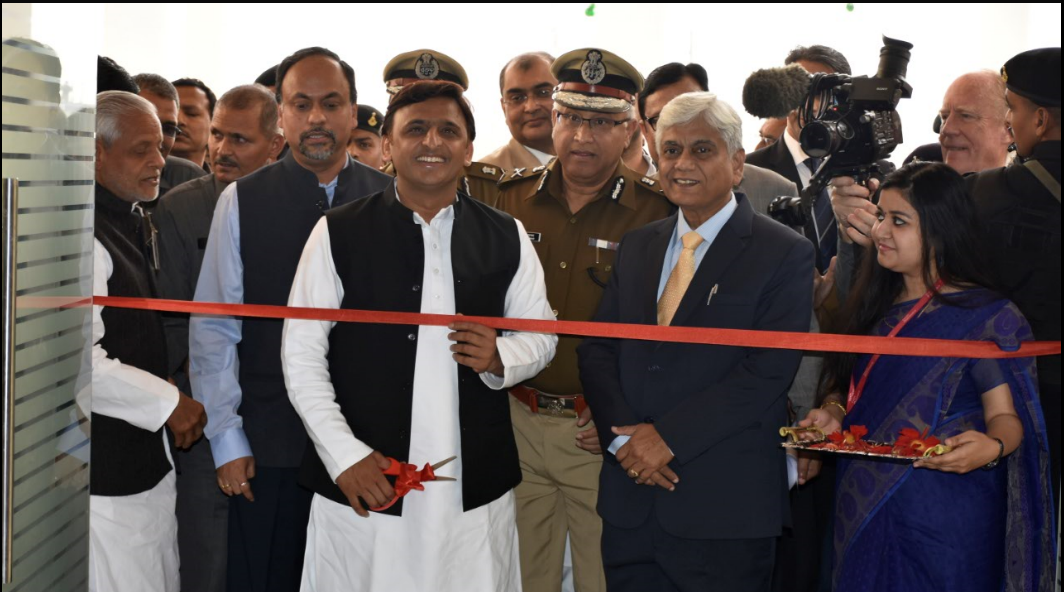 Uttar Pradesh Chief Minister Akhilesh Yadav has launched the UP Police’s largest, and one of the most ambitious projects in its history, the ‘UP 100’.

Police Emergency Systems have been operational in the form of distributed district level ‘Dial 100’ systems till now, where public calls in police emergency situations are handled by Police Control Rooms established at the District level.

With increasing demands, many of such control rooms find available resources inadequate. Need has been felt to reorganize the functioning of the district police control rooms to be able to respond to the increase in volume of calls, variety of connectivity technologies and diversity of responses required including many specialized services.

UP 100 has been established to provide integrated emergency services relating to public safety across the State of Uttar Pradesh on 24×7 basis.

A centralised contact centre has been established at Lucknow for receiving all emergency calls directly from across the state, including remote rural areas.

The centre will receive not only the mobile or phone calls, but will also respond to all other modes of communications like email, social media etc.

All dialects of hindi in the large State, major Indian and even some foreign languages will be supported. Persons with special needs will be able to connect through video calls where interpreters of sign language will transcript their issues and actions will be taken.

The UP 100 centre at Lucknow will directly control police response vehicles – 3200 cars in the first phase and additional 1800 motorcycles in the second phase – deployed in 75 districts of the state.

Upon receiving any information where field assistance is required, nearest police response vehicle will be dispatched to assist citizens. It is targeted to reach the caller within 15 minutes in the city areas and 20 minutes in the rural areas most of the times.

The personnel manning these vehicles shall be under the direct operational control of the UP 100 centre. Fire services are also being added to the field services, where automatically fire services shall be provided in cases where they are needed.

The UP 100 extends the Dial 100 services existing under the Modern Control Room scheme of the police, which has operational police control rooms functional in Lucknow, Ghaziabad, Allahabad and Kanpur, to the entire State – to all 75 districts, all cities and towns and all villages of the state.

The existing control rooms cover the urban areas of respective districts, while UP100 will cover the entire geographical area of the state, including all rural areas, without any demarcation of district borders.

Any call originating for number 100 will directly land at UP 100 Contact Centre at Lucknow. Once a call lands at Lucknow centre, it is received by professional women communication officers, who are not police officers.

The entire conversation is recorded, and then the call is transferred to Police Dispatch section to send required police assistance at the ground level and also inform the local police station.

The police response vehicle reaches the victim, isolates the scene of crime, and hands over the scene to the local police station for further legal actions.

Detailed Standard Operating Procedures have been laid out for different situations, aimed at standardization of services across geographical areas.

Citizens will be able to upload pictures and videos relating to their emergency calls, which will be tagged with their calls. The UP 100 will send detailed information about received calls and such documents received to respective police stations regularly for taking cognizance and further investigations.

Feedback from citizens will be obtained on services rendered, and case kept open till a just resolution is achieved. A call from a person in distress reaches straight at the Lucknow centre, eliminates the need for the person to visit the local police station. The infrastructure is designed to make the system available round the clock in a reliable manner. So, when a call is made on 100, it is positively answered. And, non-police women officers record the grievance with empathy, who are absolutely neutral to the issue.

Then the police directly under the control of the State centre is sent to the victim, who also have no interest in minimizing any issue. The resources provided will ensure that help reaches the victim within 20 minutes, anywhere in the State.

This process ensures that the resources constraints of local police station or discretion at that level are eliminated. All voice calls are recorded for any future reference.

All issues are documented electronically without police intervention. Citizens may also upload pictures or videos which will be tagged with their calls and forwarded to concerned police station electronically for taking cognizance. The robust IT system creates a detailed digital trail of all activities.

The UP 100 system is unique in many ways. Most fundamentally, it is citizen centric. It is designed to empower citizens get government protection in an impartial and honest manner in emergencies threatening their life or property.

And it makes the police establishment accountable for their actions. We believe that it will lead to a fundamental shift in the way police provides its services at the grass roots level, which will benefit each law-abiding citizen.