Technology touches farmers. The recent launch of a unique software enabling farmers register online for the crop insurance scheme in Karnataka has not only simplified the process of indemnity but it’s drawing a large number of farmers, writes T Radha Krishna of Elets News Network (ENN) 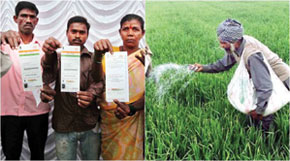 The Samrakshane (protection) software for end-toend automation of crop insurance process provides efficient, transparent and accountable system for speedy delivery of benefits and risk cover to the farming community. It will generate a unique number for each farmer to keep track of their farming activity to insure the crop against loss or damage. The system is linked to the Aadhaar database of farmers for direct payment into their bank accounts and they will be informed about the status through SMS and uploaded on the dedicated portal for their information.

“This software is a combination of Karnataka Raita Suraksha Pradhana Mantri Fasal Bima Yojana (PMFBY) and the Restructured Weather-based Crop Insurance Scheme (WBCIS),” said Siddaramaiah, Chief Minister of Karnataka, while launching the Samrakshane, recently. The objective of the new system is to effectively use IT to cover more number of farmers under the insurance scheme and provide speedy delivery of benefits.

The Government of India launched – PMFBY and WBCIS – to provide financial support to farmers suffering from crop loss or damage arising out of unforeseen events and disasters. The Government of Karnataka announced in its Budget for 2016-17 to implement Karnataka Raitha Suraksha PMFBY to help the farmers. For this purpose, Rs 675.38 crore was earmarked as the State’s share. Though Karnataka hopes to cover 50 per cent of farmers this fiscal, it expects more will enroll for the schemes, as the premium is minimal.

Direct Benefit Transfer (DBT) is an attempt to change the mechanism of transferring subsidies launched by Government of India on January 1, 2013. This programme aims to transfer subsidies directly to the people through their bank accounts. It is hoped that crediting subsidies into bank accounts will reduce leakages, delays, etc.

“The new system has many advantages,” says Krishna Byre Gowda, Minister for Agriculture, Government of Karnataka. Once the farmer’s proposal is entered into the system a unique number is generated. Using the unique number, farmers can track the various stages of activities of their insurance proposal, including the payouts. 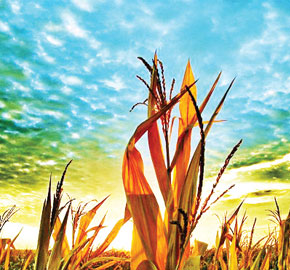 Crop cutting mobile application records video and transmits numbers soon after crop cutting experiment is conducted. It reduces scope for manipulation. It helps timely settlement of claim compared to earlier system, which was taking about 12-18 months.

The transaction between bank and insurance company was very opaque resulting in delay in payments to the farmers and also in some cases even delay in remittance of premium to insurance company even though farmer would have paid the premium in time at the bank.

The software will not allow a non-notified crop to be insured in a given insurance unit. In manual system during yesteryears, there were instances of bank branches collecting or deducting premium for non-notified crops.

With the new system, both the bank and insurance companies will work on the same system. All the data available in public domain, it will help in settling claims quickly. The software connects to Karnataka State Natural Disaster Monitoring Centre data and fetches weather data on daily basis. With digitised term sheets, pay out can be calculated at the end of each phase of an index and need not wait till the end of the insurance season.

Benefits to the Government

At any point of time, the Government would know the coverage of farmers, which was not possible in the manual system,” says Arvind Jhadav, Chief Secretary, Government of Karnataka.

This will connect to database of land records (Bhoomi). De-duplication of insured land – farmers can’t cover same land more than once. It helps in Government or Insurance companies identifying the farmers not covered under Insurance. No farmer can insure more area than what he owns. In the manual system, neither Government nor Banks were able monitor the performance of the bank but with the computerised system each branch’s performance can be checked.

In the old system, during the scheme implementation period, neither the Department of Horticulture nor the Department of Agriculture was aware of farmers covered or not covered under insurance. But, with the new system at any point of time, the departments have the access to live data of the crop and farmers covered under the insurance scheme. Through this software, the Government can know number of non-loanee farmers enrolled with their full details. This will help in bringing such farmers under financial institutions for agricultural credit.

Help To Bankers
The software automatically calculates premium for the insured crop there by reducing the chances of wrong premium calculation and payment by farmers. Also, it helps to push individual farmer wise data to the Government of India web portal, which otherwise has to be entered manually in to the portal.