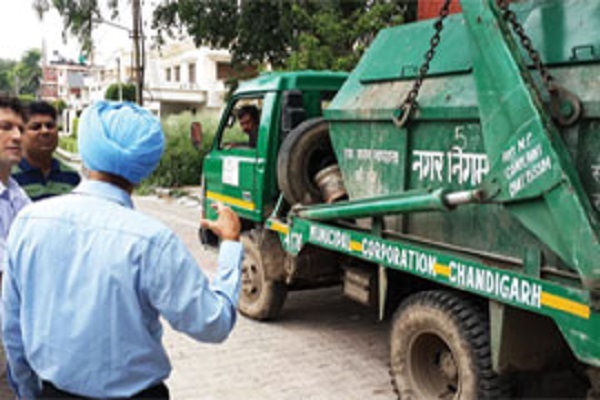 An efficient waste management mechanism is a must, among other things, for a city to be called ‘smart’. However, if waste management were the only criterion to define a Smart City, Chandigarh would have been the ‘Smartest City’, writes Priya Yadav of Elets News Network (ENN)

A city can be called a city in the real sense of the term only if its waste is managed efficiently. And, a smart city can only be smart if its waste disposal is done in a smart manner. The City Beautiful, Chandigarh, lays claims to being beautiful not just on account of its manicured gardens and green spaces but also because of its garbage-free roads, markets and residential areas.

Being accustomed to topping the sanitation chart across the country when it comes to cleanliness, Chandigarh is known for its emphasis on managing its garbage, nearly 400 tonnes, generated daily.

Spelling out his vision for the country’s first planned city in terms of waste management, Chandigarh Municipal Commissioner (CMC) B Purushartha, told Elets News Network (ENN), “Traditionally, India is known as the country of villages. But this has dramatically changed in a relatively short duration of time – past few decades have seen massive urbanisation. Mostly, we have not been able to plan effectively and now see a haphazard growth of concrete jungles which lack basic civic facilities. A city without waste management is not a city at all. For a place to qualify as a city, it must have a proper system in place for management of its waste, which must be environment-friendly as well.”

Chandigarh, which has recently been added to the list of cities to be developed into smart cities, is now looking at improved ways of man – aging its waste. “Waste processing is a basic and fundamental feature of any city. I do not consider it as a smart feature at all. For any place to be  recognised as a city, it should have a robust waste processing system in place,” said the Municipal Commissioner, a 2002 batch IAS officer.

The Chandigarh Municipal Corporation has imposed fines on those found littering in public places. Unlike other cities, in Chandigarh, the Corporation keeps a sharp look-out for defaulters

City Beautiful’s waste generation has nearly doubled in the past two decades. As of now, it has a waste processing plant that converts about 75 per cent of the city’s waste into fuel pellets. “However, this is not enough,” said Purushartha. “We have to take waste disposal very seriously and ensure that it is done in a hygienic, healthy, sustainable manner. We are in the process of  upgrading our waste processing unit and soon the waste will not just be turned to compost but also energy will be generated.” After studying various models, the municipal corporation is now starting a pilot project in a few selected sectors in the city where residents will be provided with bins to segregate the organic and inorganic waste. This waste segregation at source is expected to make waste disposal more efficient. As of now the city has door-to-door waste collection in over 90 per cent of the area. Chandigarh’s 1.05 million people generate about 400 tonnes of solid waste every day. The city employs 4,085 sweepers, which is 2.65 sweepers per km of road. More than 95 per cent of Chandigarh’s population is plugged in to a sewage network and there is no mess of overflowing drains or open drains. Also,

the Corporation has imposed fines on those found littering in public places. Unlike other cities where hardly any challans are issued for dirtying public places, in Chandigarh, the Corporation keeps a sharp look out for default- ers. In aggressive drives, garbage bags dumped are often opened and clues – like envelopes with addresses are looked for to trace the defaulters. Last year, the Corporation issued 3,543 challans (notices) to people found littering in public spaces and earned Rs.6 lakh in fines. Those who refused to pay were prosecuted.

City Beautiful’s waste generation has nearly doubled in the past two decades. As of now, it has a waste processing plant that converts about 75 per cent of the city’s waste into fuel pellets

To make things easier both for the residents and the Corporation, a provision is made by the Corporation to have construction waste removed efficiently. Earlier, the waste gener – ated during construction or renovation work was dumped carelessly or mixed with organic garbage. But the CMC has now made a dedi- cated team that responds to a helpline number and promptly removes all the waste as requests pour in. This debris is being dumped in sites identified as low lying which need to be filled for proper leveling.

With a view to enforce the segregation of Waste and to ensure better management of Municipal Solid Waste in the city, the City Cor – poration, in association with the Chandigarh Animal Welfare and Economic Development Society, has built ‘Sehaj Safi Kendras’ and ‘Khad Bano Kendras’ at various places of the city and the residents of those sectors have been asked to dispose of their household garbage or hor – ticulture waste at these designated places only.

In the smart city proposal, the civic body has laid stress on improving Solid Waste Management. City targets scientific disposal of all solid waste by 2020. For efficient Solid Waste Management, the civic body plans to distribute stainless steel dual garbage bins to residents to facilitate the segregation of solid waste at source. Two bio-methanation plants are coming up and other local waste-to-energy/ compost solutions are being explored.

Innovative ways are being explored by the UT Administration to dispose of waste effectively. The UT Department of Science & Technology, in collaboration with the Centre for Environment Education, launched decentralised solid waste management project under the ‘Waste-to-Wealth’ concept. A machine, ‘Ecoman Foodie’, has been installed at the Institute of Hotel Management in Sector 42 of the city. The machine worth Rs 3.13 lakh converts organic waste into compost within 24 hours and solves the waste problem completely.

This compost can be used for plants. The machine can process 85-90 per cent waste mate – rial into organic within 24 hours. The machine being set up can turn the food waste into 25kg compost in a day. The machine occupies less space and does not produce any stench and filth around it during processing. The machine will be used on trial basis for a few days and if it turns out to be a success, the administration, along with the Corporation, will install it at different other places in the city.