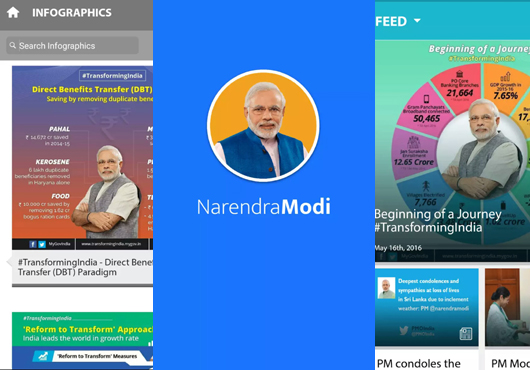 As part of his continued effort to empower people and promote participatory governance through use of technology, Prime Minister Narendra Modi on Saturday launched “PMO” mobile app that will take common man’s grievances directly to the Prime Minister’s Office.

In celebration of successful completion of two years of the launch of MyGov.in platform on 26th July 2014 as a part of the government’s Digital India campaign, PM Modi launched PMO app in the first-ever Townhall organised by an Indian Prime Minister.

While the MyGov.in portal has been serving as an available-to-all platform for citizen discussions and making their suggestions on various issues of common concern, the PMO app will bring this all on mobile phone and also serve as an effective grievance redressal mechanism.

“Technology has made citizen participation possible. Last-mile delivery is as important as politics,” the Prime Minister said launching the app in New Delhi.

An online contest was organised by the government on the MyGov.in platform last year for developing the new app. The winner of the contest is a team of six engineering students, out of whom three are from the Delhi Technical University. The team got the opportunity to create the app.

The Prime Minister also responded to a number of queries from inquisitive people from various parts of the country, like his vision for the development of villages and good governance, among others.

Modi also distributed prizes to the winners of various contests, including Ek Bharat Shrestha Bharat, Duties of a Citizen, Governance Quiz and India-Africa Quiz, at the app launch ceremony.