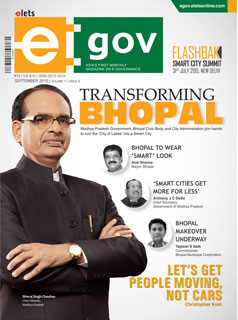 One of the pillars in the decade-long journey of Chief Minister Shivraj Singh has been Information Technology. The CMO has been aggressive on the use of technology channels and digital tools to connect the State Government machinery, citizen grievances and redressal mechanisms. Rachita Jha of Elets News Network (ENN) reflects on the state of eGovernance in the ‘Heart of India’

In India, the structure and function of development is such that if one has to analyse the progress of a state, one has to look deep and explore the heart of the state that lies in its urban and metro cities, and its soul in the villages. Madhya Pradesh has been in the news for the infamous Vyapam scam that threw the entire State administration machinery in dubious light. However, there has been a lot of social good that has been achieved by Chief Minister Shivraj Singh that is reaping benefits for the State.

In a year when the growth of agriculture sector was at 0.2 per cent in the country, Madhya Pradesh was ticking at 20 per cent double-digit figure and has even surpassed Gujarat in performance. These statistics are not achieved overnight and speak about the grassroots connect and commitment of the dynamic leadership for a bottom-up approach. His mission is to make agriculture profitable and make eGovernance a reality, which is playing the role of a catalyst in driving the development agenda in Madhya Pradesh.

One of the pillars in the decadelong journey of Chief Minister Singh has been Information Technology. The CMO has been aggressive on the use of technology channels and digital tools to connect the State Government machinery, projects and schemes’ progress, citizen grievances and redressal mechanisms. The State is ranked second after Punjab in its eDistrict Mission Mode Project (MMP).

MP is the second largest State of India, with 7.25 crore citizen spread across rural and urban areas in 51 districts. A milestone in taking governance to the doorsteps of citizens is the online eDistrict portal that currently delivers 72 services of 16 departments through 336 Lok Seva Kendras set up across the State. The portal has registered remarkable 3.34 crore applications till date. Similarly, a step towards transparency in governance was taken by introducing e-Auction for sand mines, a first in the country. The step was to check the illegal sand mining nexus and at the sametime increase the number of bidders and rationalise sand rates to generate revenue hike for the State by five times of the current earning from the activity.

If we look at the urban canvas of Madhya Pradesh, the ambition of the State in its bid and preparedness for smart cities is catching the eyes and attention of many a corporate and industry to have Madhya Pradesh on their investment agenda. We, at Elets, were a witness to the vision of the City of Lakes—Bhopal— to be a smart city at our flagship event “Smart City Conclave-Bhopal” in August this year that had deliberations from senior government officials, industry stalwarts and stakeholders from urban governance, sketching the nuances of a smart city landscape.

Investor-friendly policies and government assistance has bagged the State the commitment of Reliance Group to invest `46,000 crore in sectors like defence, IT, electronics and energy that will bring close to 70,000 jobs to the State. The State also launched TeleRickshaw mobile app for travel information, free WiFi hotspots, GPS and passenger information system in its new fleet of buses, and many more in agriculture, education and healthcare sectors to bring citizens closer to information that can improve the quality of life.

As the State Government and various departments have sowed the seeds of good governance, Elets and eGov magazine will be your aide and bring good news of eGovernance in Madhya Pradesh throughout the year 2016!