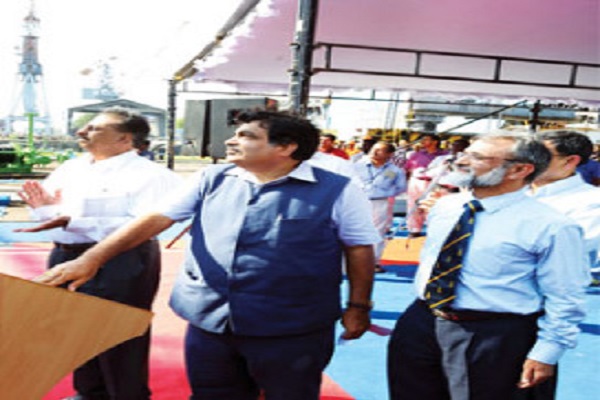 India, known for oceanborne trade since time immemorial, had lost focus on the business and bilateral trade potential that the maritime sector has mainly due to procedural delays and policy paralysis. Dotted with 13 major ports and about 200 non-major ports, the maritime sector is in revival mode, thanks to initiatives like the proposed Sagarmala Project, write Jessy Iype and Prathiba Raju of Elets News Network (ENN)

The Indian port sector is looking up. Developments are taking along the shore. The Shipping Ministry´s ambitious plan of Maritime Agenda 2020 focuses on regaining the lost lustre of the maritime sector. Waterways transport, which carries nearly 95 per cent of India’s trade by volume and 70 per cent by value, will showcase 1,758 MMT cargo traffic by 2017. It is expected to handle two billion tonnes of cargo by 2016-17 and 2.4 billion tonne by 2019-20.

B N Satpathy, Senior Consultant, NITI Aayog, sharing his views on port-led development strategy told ENN: “Port-led development is meant to serve as means of transport networks, which are extremely important for handling goods and services efficiently with minimum costs. Ports serve as a transport network globally, which will add to the economic growth of the country.”

“Port-led development strategy is an importexport led strategy and for the first time we are trying to look at coastal states as a homogeneous category. Earlier, the focus was on ‘special category states’ or ‘hilly states’ in the planned document, but it is a different scenario now. The port-led development, which was neglected, is gaining momentum. Nine coastal states have a significant contribution to the country’s economic growth,” Satpathy added.

B N Satpathy, Senior Consultant, NITI Aayog: Portled development is meant to serve as a means of transport networks, which are extremely important for handling goods and services efficiently at minimum costs

The Union Minister of Road Transport, Highways & Shipping, Nitin Gadkari, had informed a recent meeting of consultative committee of the MPs that the ambitious Sagarmala Project would focus on direct and indirect port-led development, while also providing infrastructure for transporting goods to and from ports efficiently and cost-effectively.

The Project is trying to augment 3,130 million tonnes of cargo handling by 2019-20. It also tends to enhance the port-led development in India, which suffers from poor port linkages, under performance of existing port infrastructure and lack of developed infrastructure near ports, for value addition of inbound or outbound merchandise. The Project further aims to improve the share of merchandise trade in GDP for India, which is currently at 42 per cent, while it stands at 75 per cent in Germany and for the European Union, it is 70 per cent.

“The Project will undertake redevelopment of existing port infrastructure through upgrade in port handling equipment and extensive use of IT in improving monitoring and operations of port activity. The Jawaharlal Nehru Port Trust (JNPT), which is one of the 12 major ports in India, will receive `4,000 crore to develop its SEZ. The project will identify suitable port locations with deep drafts to enhance shipping and port handling capacity. Specialised ports with focus on handling coal, energy, chemicals, commodities, etc., will be developed,” a government official informed ENN.

Nitin Gadkari, Minister of Road Transport, Highways and Shipping: The ambitious Sagarmala Project would focus on the direct and indirect port-led development, while providing infrastructure for transporting goods to and from ports efficiently and cost-effectively

TTS Phyade, Port Officer, Honnavar, Karnataka, said: “The Sagarmala Project will definitely have a positive impact on the port sector; it will have a direct impact on the economy as huge bulk cargos and commodities can be transported via waterways, as it is cheaper than the road and rail network. The railways’ major revenue is via cargo handling; similarly, ports should also focus on bulk cargo transport. Right now, many major ports are struggling to cope with the time factor on hinterland cargo transport time.”

Although there is immense potential in the port sector, there is a lack of provision to enhance the basic infrastructure management, apart from the trade relations with the private players and the countries abroad. What is imperative for the government is to gain a paradigm shift in handling the maritime industry and realise its potential to boost the economic growth of the country, feel most of the country’s port officers.

Talking about the Karnataka ports’ present status, Phyade, told ENN: “As for Karnataka, we have only one major New Mangalore Port, which is 320 km long, and has 12 minor ports. Out of these, the major port alone handles cargo, so revenue-wise, the volume of traffic is very less and is about 600 million tonne. The minor ports are used only for fishing, as the water depth level is low. In order to boost trade, the infrastructure of the ports, including the minor ones, needs to be developed.”

Suggesting that the ports should be statespecific, he said: “The State Government wants to develop the port either via PPP or they try to go for the Gujarat model. As far as the port administration policy is concerned, the Gujarat model can be followed, but to develop Gujarat-type ports is not possible as the terrain of each state differs. Gujarat has mud flats, which is not habituated by people, but in Karnataka people live dangerously close to the port.”

S V Madabhavi, Chief Engineer, Chennai Port Trust and General Manager (Projects), of Sethusamudaram Corporation Ltd: Movement of cargos is crucial for portled development, and for this, the infrastructure of ports needs to be upgraded

Stressing on infrastructure upgradation of ports, S V Madabhavi, Chief Engineer, Chennai Port Trust and General Manager (Projects), Sethusamudaram Corporation Ltd, said: “Movement of cargos are crucial for portled development and for this, the infrastructure of ports needs to be upgraded. More transshipments of cargos and usage of waterways for ship boilers are the focus for the upcoming projects from our side for the existing and upcoming ports.”

Talking about the skills required for the management, Madabhavi informed that lots of manpower is available and there is no dearth of opportunities in the port sector. “We have modern equipment. The Indian Maritime University in Chennai is already starting learning programmes that are port and marine-related,” he informed.

Some officers feel ports have varied and diverse roles to offer. Premchand Solanki, Port Officer, Daman & Diu, told ENN: “With regards to growth of the port in Daman and Diu, we plan to introduce more services, which would attract tourists. We are going to start catamarine services for studying these. We have submitted the project details to the Shipping Corporation of India (SCI) on implementing this thought soon.

Premchand Solanki, Port Officer, Daman & Diu: We are going to start catamarine services for tourists. We have submitted the project details to the Shipping Corporation of India on implementing this thought soon

The challenges involve that the coastline, which doesn’t have the suitable water depth. The channel requires dredging due to which we are currently not inviting any vessel, cargo or passenger ship to the port.”

Besides, with every sector going digital in the country, ports couldn’t be left out, too. “Recently, the whole cargo container handling has been computerised, and the person handling it has been give a user name and password, so that he could login at his will and find the location of the shipment. It becomes easy for the customs officials and lots of time is saved. The road traffic burden will be lessened due to the project as more and more people would tend to use the waterways for transport,” said Phyade.

Madabhavi, on the potential of waterways of India, said, “The waterways connect the western and eastern peninsula of the Indian subcontinent. The Indian waterways and inlands have the benefit of having their own territory that can be used for commercial and defence purposes. The purpose was fruitful and helped ports in coastal movements within the territory in cargo movements coming from nearby smaller countries. However, this stopped with the Supreme Courts’ order. Studies carried out in 2009-11 have proved how beneficial the Sethusamudaram Corpn Ltd has been. We are not sure if the government is keen on us or not.”

The ports of the country lack connectivity and it is imperative to focus on the inter-land connectivity through rail, air and road, just as other sectors have provisions to transport the necessary cargo to various destinations. This can help increase the potential to explore and expand trade and boost business in the maritime sector.

Atulya Misra, former Chennai Port officer, said, “We have 1.1 million of the capacity, out of which only 70 per cent is utilised. The country can deal with much more challenges, like inter-land connectivity of ports, which can grow in and out. The challenge is not to include other infrastructure that can ease out ports’ interland connectivity that is via railways, and national and state highways. The Chennai Port has no manufacturing activities, while it has a huge scope. Most of the drydocks come from abroad…we are the buyers and not the source.”

Atulya Misra, former Chennai Port officer: The Chennai Port has no manufacturing activities, while it has a huge scope. Most of the drydocks come from abroad…we are the buyers and not the source

Informing that the current status of the ports is changing with the Make in India initiative, Misra said that the inland system is crucial in terms of export-import. “The inland waterways has certainly increased the interland transportation capacity. Now that 90 per cent of the cargo would move via the sea route, the ports have to be geared up as we have the capacity and potential for a robust port-led development.”

Ports on the go

Long-term tax structure to attract investors, incentives for various maritime players to invest in Research and Development and concessions for equipment purchases for the manufacturing sector are the key factors to boost the port-led development. “India has a lot of potential for transportation of material through waterways within the country. The port industry will see a huge productivity and help in boosting the GDP growth,” Misra added.