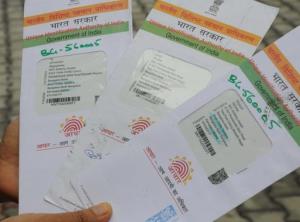 A total of 70.43 crore Aadhaar cards have been generated as of 15th Nov, 2014, according to the government.

He said that the issuance of Aadhaar number is progressing as per defined milestones. While a target of universal enrolment is being pursued, it has to be noted that Aadhaar enrolment is undertaken on voluntary basis and is an ongoing process.  There is no deadline for linking Aadhaar with bank accounts of beneficiaries of Direct Benefit Transfer (DBT) Schemes.

The minister informed that Unique Identification Authority of India (UIDAI) has provided a facility for the residents to update their Aadhaar data through Permanent Enrolment Centres and online Self Service Update Portal. In order to redress the various grievances & complaints related to Aadhaar, a redressal mechanism has been established by UIDAI which would be managed by means of a contact centre with the Toll Free Number and an e-mail id which has been given wide publicity. In addition, grievance redressal cells have been established at each of the eight regional offices of UIDAI.