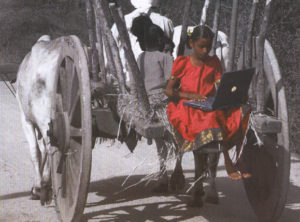 IT and Communications Minister Ravi Shankar Prasad has said the Centre’s plan to connect country’s village level governments through the National Optical Fibre Network (NOFN) in a period of three years could change the way governance has been done to date.

“The entire country will be covered by broadband within three years and the internet will reach the remotest villages,” Prasad said. Prime Minister Narendra Modi, who steered the Digital India policy, is personally overseeing the project to ensure deadlines are met, he said.

The programme would rapidly drive internet usage in India and boost the economy. “India is sitting at the cusp of a huge digital revolution,” said Prasad.

However, the Digital India programme is not without challenges, experts said. Finding the financial resources and meeting programme deadlines could be foremost among those. India’s structure where governments ruling the country and the states are sometimes led by different political parties could throw up additional complications. There is also the matter of ‘right of way’ when laying thousands of miles of fiber optic cable.

The government plans to hire at least 10 CIOs to oversee the Digital India programme in key ministries, and create four other senior positions for dealing with adoption of standards and security aspects.

The government will create an enabling platform that will aid in delivering government services to citizens as well as services in education, healthcare, entertainment and e-commerce. “Public services like land records and caste certificates will be made available online on demand online,” Prasad said. In conjunction with state governments, 20-hour e-literacy training programmes in local languages will be conducted in 200,000 community service centers across the country.