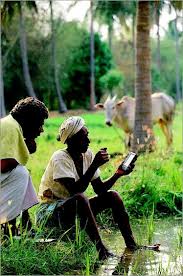 Telecom Commission, the highest decision-making body in Department of Telecom (DoT), recently approved a proposal to give free mobiles to families in villages and tablet PCs to students in government schools that could cost the exchequer nearly Rs 10,000 crore.

The scheme is expected to benefit 2.5 crore individuals in rural households while the free tablet programme would cover 90 lakh students in 11th and 12th classes.

It is to be jointly funded by the Department of Telecom and Universal Services Obligations Fund (USOF) – a fund to facilitate telecom services in rural areas. The project is proposed to be implemented through state-run BSNL which will float tenders for sourcing of mobile phones and tablets.

The tablets will cost around Rs 4,972.5 crore, of which the USOF will fund 60 per cent and the remaining amount will be provided by DoT.

The mobile phones and tablet PCs are proposed to come with a warranty of three years. Both the schemes are expected to start after March 2014. General elections are due to be conducted before May.

The tablet PC will be distributed in three phases where is first phase 15 lakh students will be covered, 35 lakh in second phase and 40 lakh in third phase. Under the proposed scheme, students will get tablets for duration of their studies at the school they are enrolled with.