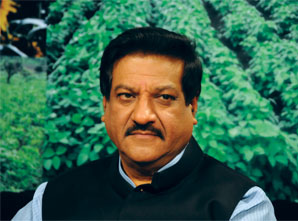 Maharashtra Chief Minister Prithviraj Chavan and his cabinet colleagues on Monday met officials of the railway ministry to speed up the elevated railway corridor that will connect south Mumbai to Thane and Navi Mumbai, an official said. The elevated railway corridor, if given the go ahead, will come up on the Churchgate-Virar section – connecting south Mumbai to Virar in Thane district and CST-Panvel that will connect south central Mumbai to Panvel in Navi Mumbai (Raigad district). Mr. Chavan chaired the meeting in which he told railway officials that the elevated corridor project, to be built at a cost of Rs.20,000 crore, would be completed by 2020, an official said.

Sources in the state urban development ministry also said that the Pune-Mumbai-Ahmedabad and Mumbai-Nagpur high speed (bullet train) projects were discussed at the meeting. Last year, the projects were launched with great enthusiasm, but soon took a back seat after several obstacles arose. The railway ministry is now trying to get them back on track, officials said.

The state government had earlier faced hurdles in the acquisition of private land and was thus unable to accept the railway ministry’s initial proposals on the two elevated corridor projects. Railway officials, meanwhile, say that the alternatives suggested by the state government will cost more and make the projects difficult.