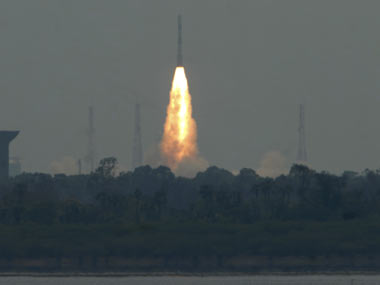 India’s first indigenous all-weather Radar Imaging Satellite (RISAT-1), whose images will facilitate agriculture and disaster management, has been launched successfully on board the PSLV-C19 from Sriharikota in Andhra Pradesh.

The 1,858 kg spacecraft, the country’s first microwave remote sensing satellite, was injected into orbit by the Polar Satellite Launch Vehicle about 19 minutes after a perfect lift off at 5.47 am at the end of the 71-hour countdown from the Satish Dhawan Space Centre here, around 90 km from Chennai.

Indian Space Research Organisation’s workhorse launch vehicle PSLV yet again proved its reliability completing its 20th successful flight in a row launching RISAT-1, the heaviest satellite ever lifted by it.

RISAT-1, culmination of nearly ten years of effort by ISRO, has the capability to take images of the earth during day and night as well as in cloudy conditions. Till now, India depended on images from a Canadian satellite as existing domestic remote sensing spacecraft cannot take pictures of earth during cloud cover.

The mission has been described as a grand success by the ISRO Chairman, K Radhakrishnan. It was a textbook launch with each of the four stages of the rocket performing as programmed and the scientists at the mission control centre broke into cheers when the satellite was injected into orbit.

Taking to the media, K Radhakrishnan, said, “I am extremely happy to announce that the PSLV C-19 mission is a grand success. This is the 20th successive successful flight of our PSLV. It injected precisely India’s first radar imaging satellite into the desired orbit.”