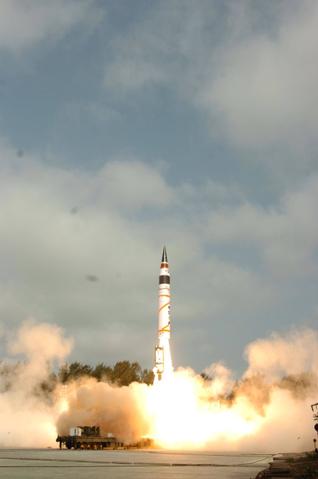 According to Chinese experts there is more fire power to India’s successful long-range nuclear-capable missile Agni-V than what New Delhi is claiming. A Chinese researcher said the missile “actually has the potential to reach targets 8,000 kilometers away”.

Du Wenlong, a researcher at China’s PLA Academy of Military Sciences, has told a media organisation that the Agni-V “actually has the potential to reach targets 8,000 kilometers away”. Du added that “the Indian government had deliberately downplayed the missile’s capability in order to avoid causing concern to other countries”.

On Thursday, India had test-fired the Agni-V missile that it said can accurately hit targets more than 5,000 km away. With this launch, India entered an exclusive club of nations that have this capability.

Zhang Zhaozhong, a professor with the People’s Liberation Army National Defense University, told the Global Times that according to China’s standard, an ICBM should have a range of at least 8,000 km. “The Agni-V’s range could be further enhanced to become an Inter-Continental Ballistic Missile,” he added.