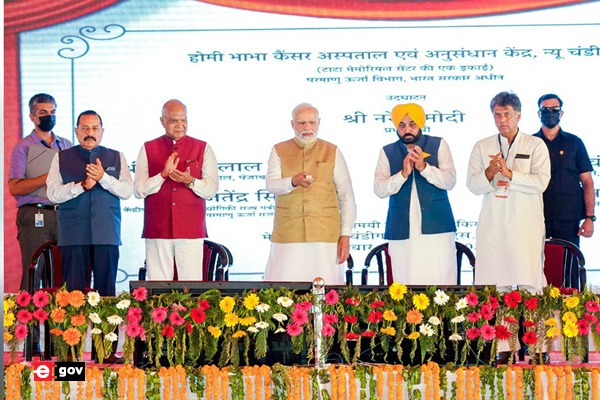 “In common parlance, the Punjabis are even afraid of taking the name of cancer as its treatment is too costly. But this centre will go a long way in ensuring accessible and affordable cancer treatment to the region,” said the chief minister while thanking the prime minister for this project.

Addressing the gathering during a function to dedicate this project to the nation, Bhagwant Mann said that this is a historic initiative which will help the state in its crusade against cancer. He asserted that though the state has played a key role in making the country self-reliant in food production, but due to excessive use of pesticides and insecticides, the people of Punjab have fallen prey to cancer disease.

The chief minister categorically said that this hospital will not only provide treatment to cancer inflicted patients, but will also help in ensuring its prevention through extensive research.

CM Mann expressed satisfaction that the 100-bedded Homi Bhabha Cancer Hospital at Sangrur has been imparting quality cancer treatment to people. He asserted that around 37,000 patients have been successfully treated so far in this premier hospital. He unequivocally said that the newly set up centre at new Chandigarh will be a milestone in providing quality cancer treatment not only to patients from Punjab, but to neighbouring states like Jammu and Kashmir, Himachal Pradesh, Haryana, Uttarakhand and Rajasthan.

Mann said that the state government has so far given Rs 888 crore to nearly 69,000 cancer patients under the Chief Minister’s Relief Fund.

The chief minister also solicited fulsome support and cooperation from the Union government for effectively checking the cross-border smuggling of drugs and arms through drones. He emphasised that Punjab is fighting the nation’s war and the Union government must extend support to Punjab for this noble cause. Bhagwant Mann expressed hope that PM Modi will magnanimously help the state with more such gifts.