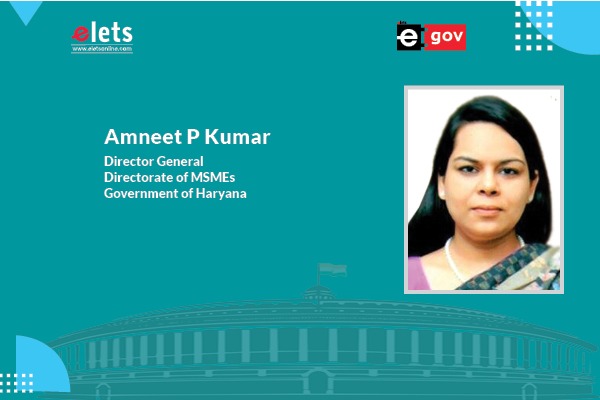 As the COVID pandemic has impacted the MSMEs and startups adversely, the Centre and the state governments came up with policy reforms and schemes to bolster their startup ecosystem and help MSMEs to bounce back. Amneet P Kumar, Director General, Directorate of MSMEs, Government of Haryana addressed how the Government of Haryana is transforming the startup and industries ecosystem at the Elets Digital Governance Summit, Haryana Edition.

The Government of Haryana has always been proactive in strengthening e-governance in the state. Highlighting this, she said, “Despite the COVID pandemic, we have seen that digitisation of processes and implementation of various programmes and schemes were done unhindered.” The Haryana Enterprises and Employment Policy (HEEP) which governs the industries in the MSME sector was launched in 2020 just before the COVID pandemic struck. However, the Haryana government successfully created a portal and provided a timeline for various schemes to be implemented.” Currently, the entire system of the MSME department, there is Harayana Entrepreneurship Promotion Council that has been set up and that itself is manned by a CEO. The Director-General of Industries and the Director-General of MSMEs look up to the HEEP 2020., she added.

All of these schemes were brought out in order to give a filip to the industries & MSME sector in Haryana. Also, it provides the entire framework for the ease of doing business and facilitate the benefit of infrastructure for our MSMEs and entrepreneurs of Haryana.

“We have portals that are working 24×7 and all the applicants can apply online. There is a time provision and has a system of auto approvals. It is highly rated on the ease of doing business portals and one of the benchmarks in how the industries get their approvals as a large part of that framework. The department has moved from license charge to auto-approval systems and a lot of coordination with various departments like town & country planning has been simplified for the convenience of the entrepreneurs,” Amneet P Kumar highlighted.

Citing the example of the practice of fetching approvals for business, she said that earlier, when a person applied for a license or some approval for setting up a business, he would run from pillar to post and the process would take a year’s time to complete. However, now there is a simple online system wherein a dashboard is available. The officials in different departments have a limited time frame available within which they have to either approve the application or file for queries in case any. Such a move has increased positivity among entrepreneurs. The entire system of approval from district level to state level is digitised completely.

On the development of MSME, she said, “We have a cluster development approach for the development of MSMEs and industries. There are various schemes under the HEEP 2020. The policy was a first of its kind and it has lowered the cost of doing business for MSMEs. Also, it has enhanced competitiveness among the MSMEs and encouraged to reduce the cost of raising capital through MSME exchange and more. Moreover, it has covered MoUs with various bilateral organisations as well.”

As a part of a cluster, a scheme has been introduced where the state shall provide readily available, affordable, common infrastructure to convince entrepreneurs to come and set up units that are based on a cluster approach. This will enhance the competitiveness of the units. The entrepreneurs in the state must make use of this initiative to leverage their competitive skills by reducing production costs and contributing to employment creation at a local level.

Finally, she added, “We have established an incubator in Gurugram and we have seen that it has contributed majorly to the development of startups. Also, it has handheld new entrepreneurs. Therefore, I would like to encourage MSMEs & startups to leverage our platform.”