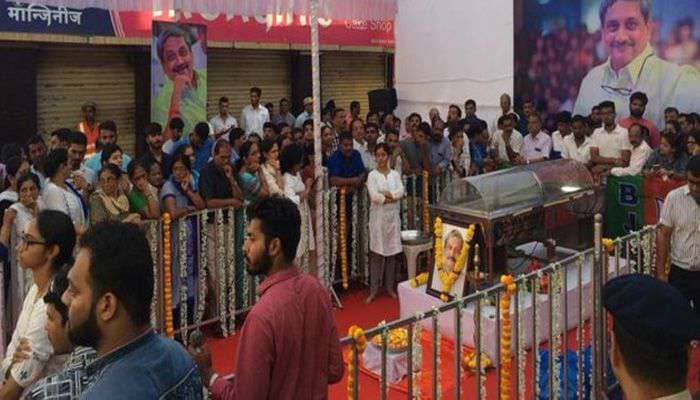 At the Goa BJP office, a pall of gloom descended as a large number of his supporters turned emotional when his mortal remains, wrapped in the tricolour, were brought.

The funeral truck carrying the chief minister’s body travelled about 5 km from his residence in Dona Paula to Panaji, as people tried to catch sight of the leader, who rose from the small coastal state to become the country’s defence minister.

Parrikar died in Panaji on Sunday after a prolonged pancreatic ailment. He was 63. Having served as four-time Goa chief minister, Parrikarhad a three-year-long stint as Defence Minister in the Narendra Modi-led cabinet.

Parrikar, who was often referred to as ‘common man’s CM‘, was being treated at the AIIMS Delhi. His health started deteriorating in February 2018 and he was first admitted at Mumbai’s Lilavati Hospital for pancreatic ailment. He was flown to the US in the first week of March last year where he remained admitted at hospital till June.

After fighting a prolonged battle against pancreatic cancer, Parrikar breathed his last on Sunday evening at his Panaji residence.

A metallurgical engineer from IIT Bombay, Parrikar was the former Union Minister of Defence. He held the office from November 2014 to March 2017. Parrikar led a coalition government backed by the Goa Forward Party (GFP), the Maharashtravadi Gomantak Party (MGP), and three independent lawmakers in Goa, a media report said.

Born in Goa’s Mapusa in 1955, Parrikar joined the RSS during his school days. He studied at Loyola High School, Margao. He completed his secondary education in Marathi and went on to graduate in metallurgical engineering from the Indian Institute of Technology, Bombay in 1978. He is the first IIT alumnus to serve as MLA of an Indian state.

He pursued metallurgical engineering from IIT-Bombay and graduated in 1978. As a sanghchalak in Mapusa, in the 1990s, he was deeplyy involved in spreading the Ram Janmabhoomi movement in Goa.

1991: An RSS pracharak from Goa, Parrikar’s electoral debut was unsuccessful when he was defeated by Congress candidate Harish Zantye in the 1991 Lok Sabha polls.

1994: He was first elected to the second legislative assembly of Goa in 1994. Parrikar had represented the Panaji constituency in the Goa Legislative Assembly when he was still new in state politics.

2005: On 29 January, 2005, his government was reduced to a minority in the assembly after four BJP MLAs resigned from the House. However, Parrikar proved his majority in the house the next month.

2007: Parrikar-led BJP was defeated in the Goa state elections by the Congress, led by Digambar Kamat, a former BJP leader.

2012: His party was victorious once again after the BJP and its allies won twenty-four seats against Congress’ nine in the Goa Assembly Elections held in March 2012.

2014: BJP wins both the seats in Goa in the 2014 Lok Sabha Elections. Parrikar was persuaded by PM Modi to join the central government as defence minister.

2017: Parrikar left the national capital and was sworn in as the CM of Goa on March 14, 2017. The Maharashtrawadi Gomantak Party, one of the parties who allied with BJP in Goa after election results were announced, had said that it would extend support to the BJP only if Defence Minister Manohar Parrikar was brought back to the state as chief minister.

In the 40-member state assembly, the Parrikar government has the support of 23 MLAs. These comprise 14 BJP MLAs, three each from the Goa Forward Party and MGP, as well as, three independents. The opposition Congress is the single largest party in the Goa assembly with 16 MLAs.