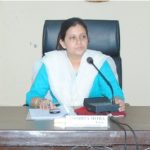 According to reports, Anindita Mitra, a 2007-batch Punjab cadre IAS officer has been forbided by the Central Government from inter-cadre deputation as well as central deputation for three years.

The post was lying vacant since October 2017 following the repatriation of Kavita Singh to her parent cadre; Govt of Punjab.

The Chandigarh Administration had recommended  her  name for the  post to the  Ministry  of Home Affairs. Now after her refusal, the Administration has sought a fresh panel from Government of Punjab.