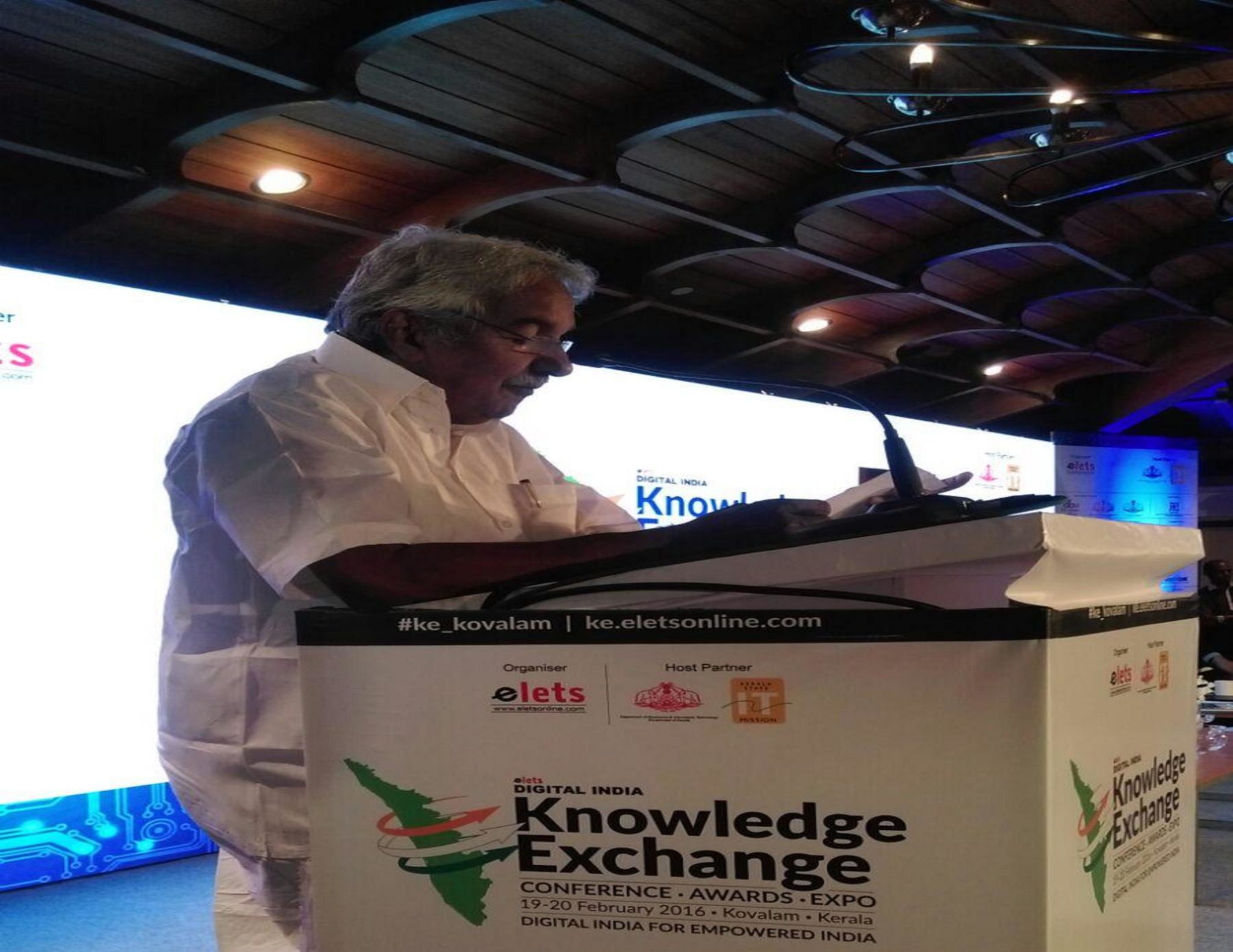 Addressing a jam-packed hall, the Chief Minister and Chief Guest on the occasion, said in keeping with the rapid growth of technology, the State Government has undertaken a number of IT initiatives to transform people’s lives and facilitate businesses, both qualitatively and quantitatively.

“In Kerala, all the 14 districts are part of the 50 e-Districts in India. So far, we have issued 1.75 crore digital certificates and provided 1GB broadband connectivity to all the grama panchayats, thus making Kerala the first Digital State of India,” Chandy said.

The Chief Minister also referred to his recent budget presentation for the 2016-17 fiscal, wherein Rs.482 crore has been allocated to the IT sector to give further push to the digital initiatives in the State. “We intend to spend towards establishing a ‘high technology business incubation centre’ at Kalamassery in Kochi and a ‘knowledge city’ near the Technopark in Thiruvananthapuram,” he added.

Chandy also launched the Knowledge Exchange Summit special issue of eGov magazine on the occasion. For more than a decade now, eGov magazine has been espousing the cause of ICT promotion and its application in the government ecosystem to take citizen-centric services to the last man.

Speaking at the two-day Summit, the Minister for Industries & Information Technology and the Guest of Honour, talked about how Kerala has played a phenomenal role in achieving the ambitious dream of becoming India’s first Digital State. “Through its concerted efforts, the government has not just driven the State towards good governance, but also worked tirelessly towards making Kerala an investor-friendly State,” Kunhalikutty said.

Kerala also tops the chart in many social indices and has got one of the most qualitative human resources pool in the country, he said, adding that infrastructure facilities like road, rail, air transport and power in the State are also one among the best in the country, and combined with its cosmopolitan lifestyle, Kerala has emerged as a preferred destination for investment.

Kunhalikutty went on to enumerate the steps taken to create a favourable business atmosphere in the State. “Kerala’s industrial and IT policies have been carefully designed to create a conducive atmosphere for the business units. Attractive offerings like single-window clearance approvals, low power tariffs and continuous power availability, tailor-made office spaces, dedicated government IT parks, private IT parks within government land and SEZs make Kerala one of the most viable and investor-friendly destinations in the country,” the IT Minister said.

Several ministers and a large number of Government officials, both from within and outside Kerala, were also present at the Summit, being organised by Noida (UP)-based media organisation, Elets Technomedia, in association with the Department of Electronics & Information Technology, Government of Kerala.

Kurian dwelt at length on an “enviable network of telecom and an impressive Internet user base”. “The State has around 95 per cent teledensity, which is tremendous. It is the only major state with Fibre Broadband connectivity in all the Grama Panchayats. It is the most inclusively connected State. The State Government is aiming at introducing more and more IT initiatives for encouraging inclusive development.”

The Principal IT Secretary maintained that his department has already started the next wave of IT initiatives in the State, which would “enable us to become a transformational government from a transactional government”.

“One such initiative is BharatNet, which would provide a fibre backbone till the grassroots level and connectivity to government establishments. ISPs can tap into this infrastructure, taking the connectivity to individual households. Connectivity infrastructure would further be enhanced after commissioning Wi-Fi hotspots across the State,” he said in an apparent bid to lure prospective investors to the State.

Speaker after speaker, including senior Kerala functionaries, and government officials and other key stakeholders in IT and eGovernance domains from across the country, shared their experiences and put forth their recommendations on how to herald an age of good governance for the good of the people at large.