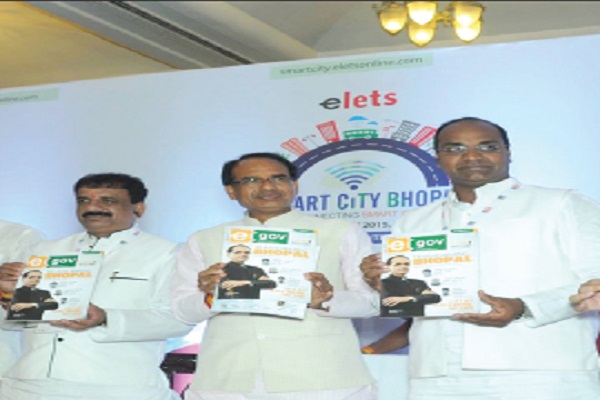 We all know that Bhopal is a city of lakes but we want to put it on the map of Smart cities, having all sorts of modern infrastructure to make lives of citizens better. It is widely believed that those who turn up in Bhopal for a few days often end up living permanently here as the city offers tranquility and other benefits over other major cities. Professionals from varied fields have gathered to discuss possibilities of transforming existing cities into smarter ones. Bhopal is undoubtedly the best city in MP but apart from developing the State Capital, other cities of the State would also be transformed into better cities. I firmly feel that Smart Villages should also be developed where people get better job opportunities and quality of life. I would like to assure BMC that the required land would be allocated for redevelopment concept at the earliest to make Bhopal one of the best cities in the world. Bhopal Municipal Corporation (BMC) is making concerted efforts to make Bhopal a global city as well as a green and clean city. For this, BMC requires at least 50 acres of land where a structure already exists and can be redeveloped for the Smart City project. For instance, a Government staff quarter at Shivaji Nagar is lying vacant and in dilapidated condition, but can be used for redevelopment. An inspection can be done by the authorities concerned to assess whether the huge swathe of land can be handed over to BMC to kick off the process of redevelopment. Organizing this conclave was a stupendous task for us to help understand the intricacies involved in materializing the Center’s Smart City project. The deliberations which would be made by experts of their fields would help the Government functionaries to transform the existing cities into modern ones. The Madhya Pradesh Government is not only making efforts to transform the proposed seven cities of MP into Smart Cities, but other cities of the State would also be developed on the lines of the Centre’s Smart City project. We want to merge the Centre’s four schemes into one, namely— Atal Mission for Rejuvenation and Urban Transformation (AMRUT), Smart City, Pradhan Mantri Awas Yojna and Swachha Bharat Abhiyan with the State Government’s two schemes— Mukhyamantri Adhosanrachana Yojana and Mukhyamantri Peyjal Yojana. We would merge the funds of the Centre and the State Government to strengthen services like sanitation, housing and reliable potable water scheme for the benefit of citizens. We started Bus Rapid Transit System (BRTS) in Indore on the pilot project basis, which is now emulated in some cities of the State. In order to fulfill the dream of developing Smart Cities, the Government is heavily relied on the banks as it has to seek support for the whopping funds required for Smart City project. This conclave has been organised to discuss and learn crucial lessons required to materialize the dream of Smart City project.

Going with the trend

Smart City is not just a concept but a wave of transformation, where people of a particular city can get all kind of essential services like drinking water, sanitation and even transport at the click of a mouse or through a mobile app—which is in trend. Another issue is to have a better solid waste management (SWM) plan in place so that immaculate cleanliness can be maintained by the civic bodies in their respective cities. Bhopal’s civic body is endeavoring to get the city listed in the first 20 proposed smart cities. The Bhopal Municipal Corporation (BMC) wants to improve the quality of life of people living in the city, along with strengthening the civic services. In the past 10 years, we have been frontrunner in doing innovations. A lot of key projects implemented by us have been appreciated and emulated at a national level, setting up an example for other civic bodies too. With the surge in population and area, BMC is facing a stiff challenge of rendering better civic services to the city, which is currently holding a population of two million people, comprising 19 zones that are spread across 460 sq kms and 85 wards. The lakes of Bhopal are its soul, which are proper and are immaculately maintained by the BMC. In addition to it, we also have a vision for Bhopal for the next 30 years.

It is difficult to define a Smart City but we can say that it’s the urbanization of smaller towns equipped with all modern facilities. Apart from urbanization, we should also ensure that it caters to the sustainability. We should have a good disposal and drainage system and reduced green house gases so that our environment becomes sustainable. When we say our city should be smart, we must start from our home. Firstly, our homes should be smart, then apartments and then buildings. We should have intelligent transportation, healthcare, water distribution, public safety and surveillance and pipe gas distribution systems. The planning of ICT infrastructure is the main requirement to make a city smart so that whenever we are trying to build a new city or are trying to convert an old city into a smart one, we can really do that based on the communication technologies. ICT also helps in the intelligent use of resources and slashing costs, footprints and energy. When we talk of Smart Cities, we should also ensure that the dream of Internet of things becomes possible through the usage of ICT.