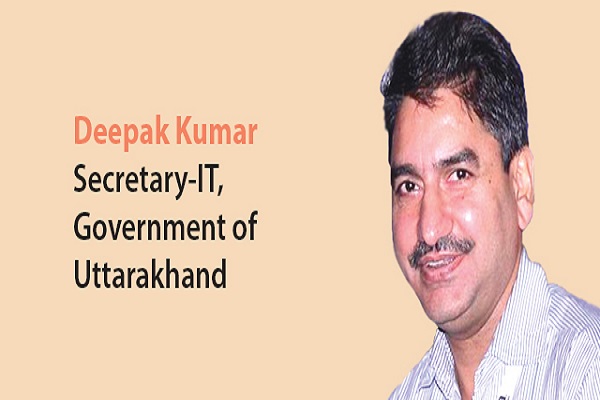 Starting with delivering citizen services at doorsteps to increasing telecom penetration through State Wide Area Networks (SWANs) in Uttarakhand, the Department of Information Technology is taking several innovative steps to provide better services to citizens. Deepak Kumar, Secretary-IT, Government of Uttarakhand, in conversation with Vishwas Dass of Elets News Network (ENN), explains how his department is striving to reach G2C services to the State’s people

What kind of IT initiatives have been undertaken so far in Uttarakhand?

Under the ‘Dev Bhoomi Jan Seva Kendra’ plan of the Government, we have thrown open at least 150 centres where people can get essential services under one roof such as applying for birth/death certificates, income and caste certificate among other services. We have also planned to open around 1,000 such centres across Uttarakhand to make people’s lives easier. Besides, we have increased Internet bandwidth by 2.5 times between state and district headquarters to remove the problem of choking to enhance work efficiency. Under SWANs, we are doing horizontal connectivity with vertical connectivity in association with BSNL and have chosen 250-300 locations for this purpose. By the end of July, we will also connect at least 50 locations with horizontal connectivity.

What are the other IT-related projects in the pipeline?

Establishment of a State Data Centre (SDC) is also the top priority of the IT department for which tenders were floated in January end and pre bid was done in February. It was about to kick off but due to stopping of funds under National e-Governance Plan (NeGP) of the Government of India, the work got delayed. Now, we would ask the State Government to provide funds to proceed further. Currently, the State’s data is shared on cloud with the National Data Centre (NDC) for which no charge is being levied by the Centre. However, SDC is the need of the hour. The IT department is also playing an advisory role to other departments. We often give our advice on the equipment procurement to other government departments.

Tourist destinations like Mussoorie, Nainital and Ranikhet would get Wifi services soon. Once it is done, other district headquarters and later on block headquarters would also be provided Wifi connectivity

What are your IT plans for the ‘Ardha Kumb Mela’ which would be held next year in Haridwar?

All the Snan Ghats in Haridwar district would be provided with Wifi connectivity to help tourists and local people to remain connected with Internet. Not only this, tourist destinations like Mussoorie, Nainital and Ranikhet would also get Wifi services soon. Once it is done, other district headquarters and later on up to block headquarters would also get Wifi connectivity in near future.

Do you have any plans to connect important cities of Uttarakhand with National Optical Fibre Network (NOFN)?

Yes, in the first phase, 28 out of 95 blocks covering 1,763 Gram Panchayats (GPs) have been planned to be connected on NOFN. All the 316 GPs of Haridwar district are being connected on NOFN which would significantly improve the connectivity. We are doing liasioning with the Centre to connect the GPs with NOFN. Many key departments like Panchayati Raj, Rural Development Department, Health, Education and Revenue Department would be largely benefitted from it. As an instance, the primary and community health centres and schools can get telemedicine and teleeducation services respectively. Many serious efforts are being made to introduce NOFN at the earliest.

How do you keep your staff updated on the latest ICT tools?

Several capacity building programmes are being organised by the IT department to impart training to its staff. Besides, I myself attend many National and State-level seminars on e-governance to get latest information on ICT developments. The State Government is helping us a lot to train our employees for swift implementation of key services.