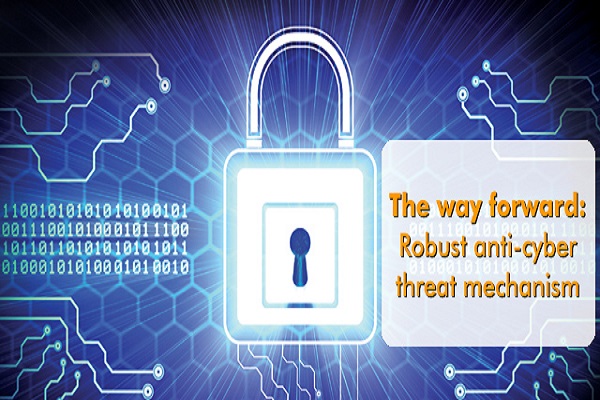 As the rise in cyber crimes goes directly proportionate to our increasing dependence on the cyber world, the only option left before us is to save our data and information from falling into unscrupulous hands through adoption of effective security measures, writes Nirmal Anshu Ranjan of Elets News Network (ENN)

Over the last couple of decades, India has carved a niche for itself in the field of Information Technology, and more and more businesses, governments, organisations, institutions and individuals are embracing IT to its full optimisation. Same is true for the banking and financial sector of the country, which leverages IT’s benefits for delivering services more efficiently, and in turn, consolidating the foundations of the national economy.

However, the blessings of IT also remain fraught with the risk of cyber attacks on account exposure of the users’ huge data bank of information regarding anything and everything. This can lead to privacy breach, unauthorised access, theft, abuse and misuse of such information by criminal elements. Starting off as a fun activity, cyber attacks are an organised global crime today, having the potential to create holes in the socio-economic fabric and security cover of a nation.

In this scenario, cyber security becomes an indispensable weapon to guard businesses, governments, organisations, institutions and individuals against any possible sinister design.

What’s it all about?

Cyber security-broadly described as a combination of technologies, processes and practices designed to protect networks, computers, programmes and data from attack, damage or unauthorised access―has caught the attention of governments worldwide. It becomes all the more relevant for India as the government has embarked on a Digital India mission, which will increase the use of internet and thus expose the country to larger cyber attacks.

India’s reliance on technology is also apparent from the fact that it has already entered the age of e-Governance, ahead of most other developing countries, and brought sectors like income tax, passport-visa under its realm. Most of the Indian banks and securities market have also gone on full-scale computerisation, bringing in the concepts of e-Commerce and e-Banking. These can be lucrative targets to paralyse the economic and financial institutions, and create havoc in the country. The damage can be catastrophic and irreversible, to say the least.

Recent reports suggest that terrorist organisations are also getting equipped to utilise cyber space to carryout terrorist attacks ― better known as ‘cyber terrorism’. These attacks also aim to gain strategic and sensitive information from a country of interest. So, the possibility of such attacks in future cannot be ruled out.

According to the Indian Computer Emergency Response Team (ICERT), reported attacks on Indian websites have increased nearly five times in the past four years. By mid- 2014, more than 60,000 incidents were recorded. In view of the enormity of the problem, the National Association of Software and Services Companies (Nasscom) has also been raising its voice for a national structure for cyber security.

However, techno-legal experts find the policy somewhat inadequate to counter the present-day challenges. They have expressed their skepticism over effective implementation of the proposals of the policy document as well. The experts insist that a robust cyber security law be formulated at the earliest to take the bull by its horns.

Having said that, increasing security concern does not have everything negative about it; the flip side of the cyber threat is the huge business opportunity hiding under its fold. The research firm Gartner has predicted that security market in India will touch US$ 1.06 billion by 2015-end US$ 882 million in 2013 to US$ 1.06 billion by the year-end.

Similar is its potential to generate employment. According to another report, by the end of 2015, India will require 5 lakh cyber security professionals across various industries, such as Finance, Telecom, Utility, Power, Oil & Gas, Airline and Government. This need is said to be generated due to the increasing internet penetration in the country, along with the high pace growth of e-Commerce, social media and other internet-based applications.

Increasing security concern does not have everything negative about it; the flip side of the cyber threat is the huge business opportunity hiding in its fold. The research firm Gartner has predicted that Indian security market will touch US$ 1.06 billion by the year-end

No matter how potential is the threat from the sky, the country cannot reverse its pace of technological advancement. What is needed is to put in place a robust anti-cyber threat mechanism by immunising its IT infrastructure and systems against any such possible attack. Rising dependence on IT calls for adoption of security measures as a way of life, wherein spreading awareness about cyber threats can go a long way in mitigating the problem. It’s time to cash in on the latent business and employment potential of the cyber threats, instead of getting cowed down by the attackers or sitting pretty to become an easy prey.