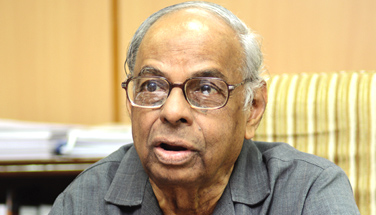 “While financial inclusion can be enhanced to a large extent by improving the supply side or the delivery systems, it is also important to note that many regions, segments of the population and sub-sectors of the economy have a limited or weak demand for financial services,” says Dr C Rangarajan. In conversation with Kartik Sharma

Do you think schemes like Direct Benefit Transfer (DBT) and Aadhaar linked money transfer will help the government in enabling every section of society to access banking and insurance related products?
The instruments like Aadhaar will help, but I think we need a more fundamental change in the system in order to be able to reach to the remotest parts of the country and also to reach to the vulnerable and poor people. Financial Inclusion is a process through which vulnerable groups and poor people are brought in the ambit of organised financial system. So as long as they remain outside the organised financial system, they are subject to exploitation. In fact numerous surveys have shown that some of these people do not get credit even from the unorganised sector.

Therefore the objective of Financial Inclusion should be first, to bring within the fold of the organised financial system the groups which are not so far being reached by the banking system or other financial institutions and provide them the ability to transfer funds. Second and more importantly the credit value system has to be improved. These people have access to the kind of credit that they need for leading their lives. Facilities have to made available to these people for receiving and paying money, and everyone should also be able to receive credit. It is by developing such systems that we can have effective Financial Inclusion.

In the last decade India has seen the development of Self Help Groups (SHGs). But these groups are majorly concentrated in the southern part of the country. Should there be some organisational mechanism to do away with such regional disparities?
The Self Help Groups have done a good job in the southern part of the country. They have also started doing good work in some parts of North India as well. But we need a mechanism for organising such groups. They also don’t come on their own. I think we need a multiagency approach. In some part of the country, the cell phone booths might be playing a major role, whereas in some other part the cooperative credit organisation at the village level could be of great importance. We don’t really need to restrict ourselves only to central groups; rather we must create a mechanism so that it can flow to the small people.

In fact a strong agreement towards setting up village level credit societies or cooperative banks which was once mission in the country needs to be evolved. Secondly regional rural banks should also play effective role as the concept of introducing regional rural bank was to reform banking systems in regional and rural areas. There is also the possibility of setting local area banks in the entire country. Hence I believe that central groups can play a very effective role in providing banking and financial services to each and every citizen. We need not to restrict ourselves with central group; rather we must focus on institutions which can enhance services at the grass root level.

Major thrust in Financial Inclusion is today being made by the Public Sector Banks. What kind of role do you see the Private Banks and other corporates playing in this area?
Financial inclusion is the mission of every banking system. A banking system comprises of public sector institutions and private sector institutions. It is extremely important that private sector banks play an important role in terms of taking banking services to all parts of the country. There should be no distinction between the public sector and the private sector when it comes to the implementation of financial services to the people. Business Correspondents can be employed by technology companies or they can be recruited locally. Both public and private sector bank can have a role to play and business correspondent can enhance banking services in the country. I would also like to add that while financial inclusion can be substantially enhanced by improving the supply side or the delivery systems, it is also important to note that many regions, segments of the population and sub-sectors of the economy have a limited or weak demand for financial services .

What about the viability of the Financial Inclusion models? Do you think that some changes are needed to improve viability?
In my opinion, the Financial Inclusion related activities will become viable over a period of next five years. The act of bringing millions of people into the fold of organised financial sector requires a period of time to pay off. The banks have to develop their Financial Inclusion solutions while keeping in mind that it will take a longer period of time for these solutions to become variable. Time horizon is very important aspect. If the horizon is too short, then everything will become unviable.

Viability can only come with a longer time frame. I think ATMs can be very useful for providing certain facilities at a cheaper cost. We also need to understand that most farmers earn their income only during certain seasons in the year, and they have to save this money to take care of their expenses throughout the year. Therefore it is very important to have a financial system that can provide people with a banking system so that they can save money, to sustain themselves and their families for the rest of the year. A healthy financial system will help in bridging the gap between all sections of the society.