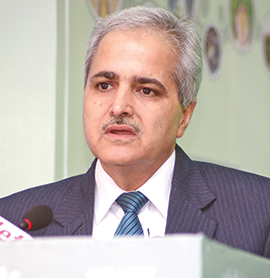 Give us an overview of the work that TCIL is doing in India and abroad?
TCIL is a Government of India Enterprise which is engaged in talking India’s expertise in telecom and IT to the other developing nations of the world. The company is in operation for around 35 years, it was set up in 1978, and it has conducted operations in 80 countries including the whole of Africa, Middle East, Asia, and Far East. TCIL has been involved in some projects in the United Nations and in Europe. Company’s core competence is in the fields of Switching, Transmission Systems, Cellular services, Rural Telecommunication,Optical fibre based backbone transmission systems, IT & Networking Solutions, Application Software, e-Governance,3G Network, WIMAX Technology and also Civil construction projects. Inthe recent past, TCIL has diversified into infrastructure projects, such as those on infrastructure.

• Rehabilitation of Telecom systems in Kuwait after Gulf War.

• Emergency Restoration of Telecom Network in 11 Provincial Capitals for MOC

• Operation and maintenance of GSM Network for Kingdom of Saudi Arabia.

• Consultancy for building of Telecom Network based on DWDM Technology for GAIL.

Tell us about the Optical Ground Wire (OPGW) projects that you are executing in Algeria.
TCIL is executing large OPGW Projects in Algeria for replacement of ground wire of the HT transmission system with OPGW under live line conditions on existing 40 nos 220 KV power transmission lines. These 220KV power transmission line cover a total distance of about 3000 Kms and pass through terrorist infested areas in mountains, forests and deserts of all the 42 wilayas (districts) spanning Algeria. OPGW stands for Optical Ground Wire. The characteristic of the Optical Fibre is that there is no effect of high voltage induction on the data being transmitted through the Fibres. Hence this characteristic of the Fibre is exploited to transmit the data along the high power transmission lines.

“4G will witness higher uptake than 3G, as the latter has not been able to promote data services”

TCIL is well known for implementing complex projects. Tell us about some of the most important projects that you have implemented.
We have implemented a complex network project very recently. The project entails the establishment of a virtual connectivity network between India and Africa. The successful commissioning of this Pan African project is a great honour for TCIL. With the execution of this project, TCIL has developed core competence in the emerging Tele-education and Telemedicine domains. As of 31st March 2012, 48 member countries of the African Union have signed the agreement with TCIL for participating in the Pan African e-Network project, and TCIL has already commissioned the system in 47 countries. There is a telemedicine medicine project we have established again in these 48 countries and the experts from India are able to advice their counterparts through this. Doctors can directly see their patients through the telemedicine network and diagnose their illnesses.

TCIL is also doing some work for the NOFN project. Please tell us about it.

Even though Telecommunications is the domain identified with TCIL across various geographies it has worked, it has also developed expertise in the field of Post & Telegraph,Police & Defence, e- Governance, Banking & Insurance, Oil and Power through successful project executions. TCIL had also been appointed as Consultant for National Optical Fibre Network (NOFN) Project to formulate a basic report on the project, covering technological options feasibility, network architecture,network operation, implementation planning,interconnection and inter operability issues in a multi-operator scenario. The report has since been submitted to the Core Team. On successful completion of the project, TCIL has been designated as Project Management Consultant by the High Level Committee for the execution of NOFN Project.

What are the projects which you are doing in J&K?
In J&K we are primarily involved with capacitybuilding work. We have trained many people in project management skills. Before that we have laid optical fibres for IRCON which has been extended up to Baramullah. We have also installed towers for Doordarshan in Kashmir in number of locations. We have done some optical fibre projects even for BSNL apart from IRCON. The problem which the country is facing right now is that the project management skills are missing the result is that the projects are facing delays, cost over runs and quality. If you want people to become conscious about it, you have no option but to go in for project management. So basic idea of this was familiarising people.

In your opinion what is the business potential of 3G. What kind of expectations do you have from 4G?
4G will witness higher uptake than 3G, as the latter has not been able to promote data services.3G services are a passing phase in India,where as 4G will offer improved streaming for services such as video-on-demand, which will encourage users to opt for them. Globally,4G has been launched in several countries. In India, long term evolution (LTE) advanced networks hold the promise to reduce the energy demand from telecom networks in rural areas, as base stations operating on this technology have significantly lower power requirements, which can be met through a small solar panel. This will reduce dependence on the erratic grid supply at rural sites.