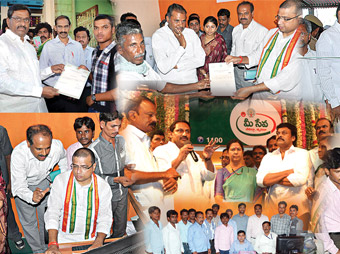 From eSeva to Mee Seva…

With the intention of leveraging ICT for bringing better governance and development, the Government of Andhra Pradesh initiated the eSeva project in 2001. The eSeva project was
devoted to serve as a single-window solution to citizens residing in the urban areas citizens of the State. After that the Common Service Centres (CSCs) came into being to extend similar benefits to the rural citizens of the state as a part of the National e-Governance Project (NeGP) of Government of India.

Even though eSeva succeeded in reducing the drudgery of bill-payments at multiple counters, it was still serving as a ‘post-office’, accepting applications, sending by post to the  concerned office, receiving back and then handing over to the citizens.

The realisation dawned that the power of IT was being grossly under-utilised in various government departments. New initiatives were needed to create a single window online interface
for facilitating interactions between the government and the people. A solution was needed to help citizens who were being forced to run around various government offices several   times to get information and were falling prey to the touts. A system that could ensure a stipulated time-frame of delivery was essential.

Eventually eSeva initiative evolved into the Mee Seva, which is a Telugu term meaning ‘at your service.’ The Mee Seva initiative has been conceptualised and developed in Andhra Pradesh. The Project entails delivery of various G2C services in a user-friendly format by bringing in a digital PKI enabled integrated architecture through multiple service delivery points by fusing in the various pre-existing state initiatives with the NeGP MMPs.

The Mee Seva project brings in strict adherence to citizen charter time limits and ushers in a whole new paradigm of across the counter services to ostensibly work flow services through
massive porting and bulk signing of databases. Mee Seva adopted the concept of central pooling of all these records, digitally signing them with the digital signature certificates of
the authorized officer, storing them in the database and rendering them using a web-service. All the documents rendered are digitally signed and electronically verifiable. Mee Seva leverages to fullest extent, the IT infrastructure like State Data Centre (SDC), State Wide Area Network (SWAN) and Common Service Centres (CSCs) created under NeGP initiative of Government of India.

Today Mee Seva has ended the ‘tyranny of ink signatures’. It created a silent wave and with its sweep allowed many moribund processes and approaches to be revamped. Its effectiveness can be measured in the satisfied eyes of the citizens strengthening the democratic foundations of our country and bringing citizen centricity to the forefront. With Mee Seva in place, the stage is all set to implement and monitor the Right to Services Act, which is in the offing.

Mee Seva is operational across all the districts of Andhra Pradesh covering the length and breadth of the state. With the centralised architecture, any service can be accessed from anywhere. Large numbers of “Mee Seva” delivery channels are situated in the Districts covering all mandals in the state. There are more than 100 centres in every District. It has been mandated to the service providers of the Mee Seva Centres to establish the centres as per specific norms (Min. infrastructure required for a centre along with colour schemes) for common look and feel.

Glimpses of the launch of Mee Seva services in Andhra Pradesh… The following strategy was adopted for implementing the Mee Seva Project

• Inter departmental coordination meetings – Once Mee Seva was conceptualised, meetings were conducted with key Departments to describe the entire concept, its impact and take them on board at the very inception.

have been established to cater to the citizens. More than 6000 Mee Seva counters are made available across the State, both in rural and urban areas with a uniform look and feel. All these counters are established as per certain specifications and guidelines issued by the State.

• Development of web-based Mee seva application – Mee Seva is a web-based application and has been developed to offer the highest level of transparency in extending G2C services.

• Improving/establishing connectivity – Since many of the transactions require substantial flow of data, connectivity is provided or improved to all the Government departments as
well as the kiosk. The Horizontal Connectivity scheme of the GOI is used for this purpose.

• Digitisation of records – Records are digitised, wherever digital databases are not available.

• Centralising databases – Databases, containing the information are purified and po

rted to the central departmental database server co-located at the State Data Centre.

• Secured stationery – Secured  stationery with 8 security features is being used

to deliver the certificates, to make duplication difficult. Online Verification, of course is possible by using the SECR.

• Publicity – Participation by public representatives during the inaugurations have attracted wide media publicity. Wide publicity has also been given via electronic and print media, so that people know of the changed mechanism and do not revert to the old system.

active to get feedback from the citizen.

• Automatic Payment Gateway – The payment collected from the applicant at the kiosk is distributed online automatically to the various stakeholders in real-time. This solves the
problem of reconciliations, late-payments, embezzlements and audit paras.

• Reward/Penalty for nondelivery – A system of awarding positive marks for good performance and vice versa has been evolved.